The Administration of Nuru Din Islamic School, under UMMUL Qura Foundation, recently held a graduation ceremony for the outgoing Grade 12 and 9 students respectively at a ceremony held at the School Headquarters in Faji Kunda.

Speaking at the graduation ceremony, the principal of Nuru Din Islamic School, Aji Oumie Cham, asserted that the foundation was established in 1996 and funded by the Late Alhagie Mustapha Lowe. Currently the school has an enrolment of 826 students of which 375 are girls and 445 are boys.

She pointed out that the school is a basic cycle school with lower, upper and senior components,

She added that the senior sector operates 3 classes that are grade 10-12. "I am grateful to Allah that the performances of both sectors were extremely good compared to the performance of many Arab schools," she said.

Mrs. Cham pointed out that in Grade 12, 14 students sat to the certificate exams and all registered 100% passes with no failure. In Grade 9, 28 students sat for the final exams 25 students passed with 3 failures. She added that June 2008 was the first time that students sat national AMANA certificates exams and they are now awaiting results.

Speaking earlier, the guest speaker, Sheikh Omar Qurasish who is among the founder fathers of the foundation, highlighted the achievements the school has enjoyed. He said the foundation offers sponsorship for 16 students to pursue the diploma course in and . He further said that one can be a leader without an educational background, "either in English or Abrabia."

Others who graced the occasion were the President of the Foundation Alhagi Mustapha Cham, and the graduation ceremony was entertained by the Drama group from the school 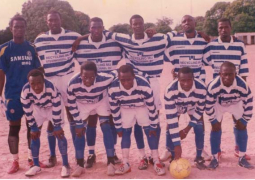