Njie’s FC beat Redson FC 3-1 on penalties after a 1-1 draw in the regulation time in the semifinal played at the Comium Park opposite Gunjur Car Park to advance to the final of the ongoing Lamin King Colley’s junior football tournament.

Njie’s FC defeated Gunjur Project FC 1-0m in the quarterfinal prior to their semifinal clash with Redson FC, who beat Kaku United on the same score line in the other quarterfinal.

Redson FC opened the scores through Ebrima   Conteh, after the interval Njie’s FC player handled the ball inside the area to give his side the lead.

Njie’s FC responded back and leveled the scores through Ebrima Gibba mid-way into the second half.

This pushed the game into a post-match penalty shootout, which ended 3-1 in favour of Njie’s FC. 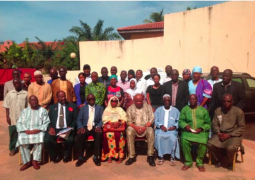