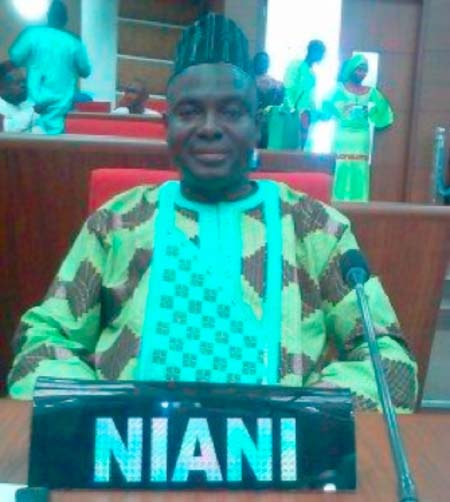 The duo participated at this programme as voluntary members of the National Conference of State Legislators (NCSL) and their travel expenses, participation fees and accommodation were borne by themselves.

“They were issued US entry visas from Banjul for one month and at the end of the conference he (Hon. Sambou) failed to return as scheduled, whilst his colleague has since returned and resumed duty,” he stated.

The clerk of the National Assembly took precautionary administrative measures to safeguard and protect the interest, dignity and integrity of the House in a letter to the Ag. Hon. Speaker on this matter dated 29 August 2016.

Hon. Jawla further said the person in question was copied with the said letter, which he received but still failed to heed the warning.

The said letter read as follows: “The Hon. Member has recklessly abandoned his duty and office. He has breached his rights and privileges as prescribed in section (112) (a) and (b) of the 1997 Constitution of the Republic.

“This is also an affront and disgrace to the sovereign people of the Republic; in particular, the Constituency of Niani; who trusted and voted him on an independent ticket to the National Assembly.

“He unceremoniously and without regard to conscience and dignity, abandoned the sovereign people of his constituency by falling to return.”

Hon. Jawla said that misdemeanor or wrongdoings are always a phenomenon in society; but society should also be able to put in place measures and mechanisms that would appropriately sanction and punish such misdemeanors.

“If we cannot regulate our own affairs; if we cannot discipline our members and if we cannot frown on the misconduct of any of our membership; then let us not expect anybody to respect us, nor to take us for our words.”

Accordingly and in pursuance of the provisions of the Standing Orders 26 “a motion may be made without notice”.