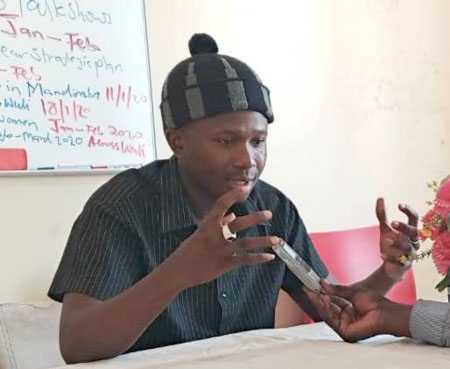 Ebrima Njie made the statement yesterday at his office in Serrekunda, on the occasion of International Zero Tolerance to FGM Day.

According to him, despite many interventions by various stakeholders several women and girls in the country continue to suffer from the brutal consequences of the practice.

As we mark this day, he added; “we need to do more to save thousands of girls and women from the shocks of this practice that is harmful to their health and violates their physical integrity and fundamental rights as women and children.

FGM/C continues to violate the right of women and children in the Gambia and around the world.”

According to Njie, some of the immediate complication includes severe bleeding due to cut across from the dorsal artery of the clitoris, shock also as a result of severe bleeding and pain as well as urinary retention: due to pain and partly sealing of the urethral orifice.

“It could also lead to infection because of the unhygienic condition and application of local treatment by the circumcisers,” he lamented.

He hailed the various partners and stakeholders as well as communities for their efforts in working and advocating for ending of the practice in the country.

FGM/C continue to violate the right of women and children in the Gambia and around the world. Some of this complication could be a violation of women’s fundamental human rights, perpetrates the subordination of women and the unequal distribution of power between men and women, have consequences for health and wellbeing carries a heavy human and economic cost hinders development.

Beakanyang, he said, as a leading human rights organisation in the country is demonstrating its commitment to ending the practice in a generation.

“We will continue to work with partners internationally and locally to strengthening our work in communities in creating a conducive environment for women and children in The Gambia especially in the Upper and Central River Regions,” Njie noted.

He argued that Female Genital Mutilation will not end simply end by passing a law but communities collectively and publicly advocate for Zero tolerance and work together to end its practice.

Meanwhile, according UNICEF at least 200 million girls and women alive today have undergone some form of FGM and if current trend continue many more millions of girls are at risk of being subjected to the practice by 2030.

The United Nations sets aside 6th February as a day to globally recognize the need to protect girls and women from all forms of Female Genital Mutilation (FGM) dubbed “International Zero Tolerance to FGM Day”.  This day is a UN designated day aimed at drawing the attention of international and national communities of efforts needed to accelerate action towards the elimination of FGM. The theme for this year is “Unleashing Youth Power”

On 20 December 2012, the United Nations General Assembly adopted a resolution banning female genital mutilation worldwide (A/Res/67/146), which was renewed in December 2014 (A/Res/69/150). This historic step demonstrated the political will at the highest level to bring an end to this human rights violation.

Article 4 of the resolution “Urges States to condemn all harmful practices that affect women and girls, in particular female genital mutilations, whether committed within or outside a medical institution, and to take all necessary measures, including enacting and enforcing legislation, to prohibit female genital mutilations and to protect women and girls from this form of violence, and to end impunity”.