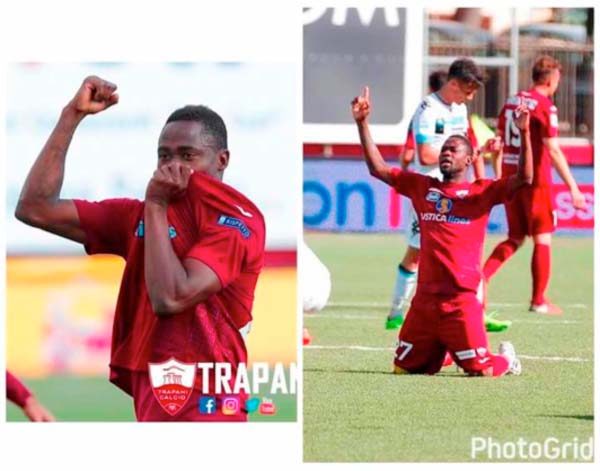 Gambian sensational footballer Lamin Jallow has made a winning comeback for Serie B side ASD Trapani with a 1-0 win against Pisa on Saturday, The Pointsport has gathered from the club’s official website.

The 22-year-old talented attacker was stretched off the pitch during Trapani’s narrow 1-0 win away to Vicenza a fortnight ago.

Hours later, the club doctors confirmed the impressive attacker Jallow has suffered a collateral knee ligament, which requires further test to ascertain the exact cause of the damage.

The test results, confirmed Jallow, has sustained a minor knee problem. He missed two league games on his road to recovery.

The highly rated forward Jallow was impressive under coach Igzazio Arcoleo when he scored twice, as Trapani crushed opponents to a 4-0 win over Serie B side Barri 1908, one month ago.

The news comes as a massive boost for ASD Trapani, who are fighting a battle to avoid relegation.

The club sit third from bottom on 37 points in the league table, two places above bottom two, Vicenza and Brescia, on 37 and 35 points respectively.

But their latest win has helped them to secure 40 points and they are likely to move further steps away from the relegation zone when they face Capi in the next Serie B league match.

The former Bakau United and Real de Banjul wonder kid,  Jallow is currently on loan from Cittadella, where he netted seven times in 25 league matches during the 2015/16 league seasons.

The two clubs (Cittadella & Trapani) reportedly reached an agreement for the service of the pacy forward, and a loan deal was confirmed by Chievo Verona, who still maintained ownership of the player after signing him from Real de Banjul in 2014.

Jallow has five international caps under his belt to date, and is looking at adding more Scorpions games to his name when The Gambia begin their qualifier for the preliminary rounds of the Orange Caf Africa Nations Cup tournament to be held in Cameroon in 2019.