More than 100 human rights defenders and activists, representatives of civil society organizations, UN and African Union officials are currently gathered in for the Forum on the Participation of NGOs in the 49th Ordinary Session of the African Commission on Human and Peoples' Rights and the 23rd African Human Rights Book Fair.

The forum, organized by the African Centre for Democracy and Human Rights Studies, ACDHRS,  in collaboration with the African Commission, opened yesterday at the Kairaba Beach Hotel.

The objective of the forum is to foster cooperation among and between NGOs as well as with the African Commission, with the aim of promoting and protecting human rights in .

Top on the agenda is the theme of the Development of Human Rights and Democracy in Africa, which will focus on the overview of the Human Rights Situation in .

The forum also coincided with the African Centre’s 23rd African Human Rights Book Fair, which seeks to give human rights NGOs the opportunity to share their materials with other NGOs, and to promote networking of human rights organizations on the continent and beyond.

Delegates are, among others, expected to brainstorm on elections and instability in Africa, 100 years of women's rights advocacy, prohibition of torture in Africa, rights of persons with disability in Africa, enforced disappearances, HIV/AIDS and human rights, sexual orientation and gender identity, and freedom of expression in .

Officially declaring the forum open, Hon. Abdoulie Bojang, Speaker of the National Assembly, said the African Commission is mandated to oversee the implementation and interpretation of the rights and duties as enshrined in the African Charter on Human and Peoples' Rights.

"Over the years, NGOs have become indispensable being involved in setting international human rights standards and documenting human rights violations. They have been involved in advocacy and lobbying initiatives for the effective implementation of the provisions enshrined in human rights instruments signed and ratified by states," Speaker Bojang added.

According to him, while some countries on the continent registered progress in terms of improving democracy and human rights situation, many more continue to stray away from this trend.

In his view, human rights violations continue to take place on a daily basis.

He expressed hope that the forum will push the continent a step forward in the process of ensuring the respect for human dignity, human rights and the democratization process in African countries.

Also speaking at the opening ceremony was Ms Reine Alapini Gansou, chairperson of the African Commission, who underscored the importance her commission attaches to the NGOs forum which, she added, avails the regional delegates the opportunity to review the current human rights situation in , and based on which recommendations will be sent to the African Commission for consideration.

She encouraged state parties to do more in safeguarding the protection and promotion of human rights in Africa, while imploring delegates to work hard in order to free from human rights violations, which according to her are occurring day by day.

Mabassa Fall, executive member of the dilated on issues of transitional justice, which he said are important to deal with at this crucial moment for .

"The African Union will take up the issue of transitional justice. We really remain alert about these issues looking at the current situation prevailing in the Arab world, West Africa notably and other places," he added.

Dr Momodou Dia of the political affairs department of the African Union, called for the protection and promotion of human rights, noting that the issue of human rights is a global concern, but can be overcome through joint efforts.

"The issue of human rights is a serious concern to the African Union. Human rights and democracy are on top of the AU's agenda," he added.

Other speakers at the forum included Hassan Shire Shiekh, committee member of the NGOs forum steering committee, who hailed the efforts of African human rights defenders. 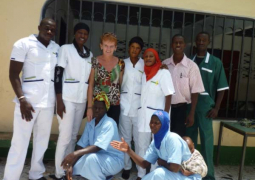