Baba Ceesay, director general of National Centre for Arts and Culture (NCAC), has reported the WIPO study on the size and economic impact of copyright-based industries to the Gambian economy, to the PAC/PEC.

The NCAC director general made this statement before deputies while presenting the NCAC annual report for 2013.

He said the study was requested for to enable policymakers and other stakeholders to appreciate the positive role that a vigorous sector could play in the economic and social advancement of a country.

“It is expected that the results of the study will provide statistical data on the actual economic contribution of the creative activities, which can serve as a basis for adjusting policies and strategies aimed at promoting growth and development in the country’s copyright-based sectors,” Ceesay said.

According to NCAC director general, in 2013, the copyright office worked with WIPO to start the study.

The recruitment of local consultants was successfully done, and the methodology and work plan of the consultants completed, he said, adding that the study started in the second quarter of 2014 and would last for 12 months.

Ceesay further informed PAC/PEC members of the National Assembly that the copyright office has continued to execute its mandate of registering copyrighted works.

Creators are encouraged to register their works with the office as required by the Act, he said.

However, he added, due to the absence of an advisory panel on registration, only those works which in the opinion of the director were self-explicatory, received automatic registration.

Others, which needed closer scrutiny, were received and deposited and their copyright claimants given acknowledgement notes pending the empanelling of a works commission.

The sensitization carried out during the copyright workshops and meetings had helped to encourage more creators to seek registration, he added.

WIPO would continue to support the copyright office through regular invitation to meetings, workshops and seminars abroad, he stated. 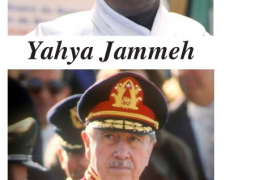 More than D800, 000 worth of items theft case reaches court