The Gambia Football Federation (GFF) will be unveiling today a new coach for the country’s national team, the Scorpions.

All are eager to know the national coach to be - a foreigner or Gambian coach?

Our experience with Raoul Savoy is a good lesson to learn from, although in the coaching domain it takes who knows what really to do and thorough administrative support, for a successful campaign to be offered by a team coach or manager.

It is, therefore, expected that the new coach would meet the necessary standard and requirements to take charge of the national team.

We have a long way to go, and there are very important matches awaiting us in just a few months’ time.

So it is expected that the GFF would give us a correct coach that will lead the Scorpions to successes. We are fed up with disappointing results.

Under coach Raoul Savoy, the Scorpions only sensed draws and defeats in 2015. They included a 1-1 draw against Uganda and a 3-1 loss to Morocco in a friendly encounter.

In international competitions, The Gambia drew goalless with South Africa away, before losing at home to Cameroon 1-nil in the first-leg of the Africa Cup of Nations qualifiers.

For the World Cup qualifiers, The Gambia drew with Namibia 1-1 in Banjul, but went on to be eliminated in the return leg after being beaten 2-1 in Windhoek.

In all these encounters, good performance and victory were not really registered by the national team.

However, it will be appropriate now that we appoint a coach that can handle the affairs of the team well and take us to the ‘promised land’ of good performance and successes.

We have some matches coming up soon: one is against Mauritania in March this year and return legs against Cameroon and South Africa.

So we must be serious and work hard with the help of the new coach and the GFF to consolidate our team and get the boys perform well to give the Gambian nation the desired results.

It is, therefore, advisable that more friendly matches are organised by the relevant authorities to keep the boys fit and prepared for the battles ahead.

The GFF should also continue to encourage the boys by giving them lucrative incentives that would motivate them to put in all their best.

As we wait keenly to see the coach to be, we as a nation should continue to pray and support the national team for it to always succeed, because its successes are our successes and will do us proud.

“Selecting the right person for the right job is the largest part of coaching.” 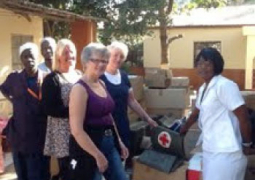