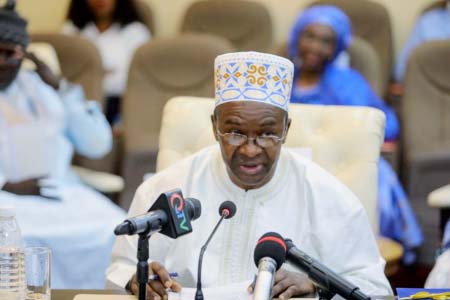 The chairman of the Constitutional Review Commission (CRC), Justice Cherno Sulayman Jallow has stated that constitution-building is a serious business, adding that it is also a herculean task, especially when the drafters of the new constitution are confronted with tons of wishes and aspirations for inclusion in that constitution.

Justice Jallow was speaking on Monday during CRC presentation ceremony of the new draft constitution to the Gambian leader Adama Barrow at State House.

He further stated that they seriously looked at key constitutional issues relative to the present and future generations after being tasked by the Gambian leader to review the 1997 Constitution and develop a constitution that will serve the test of time.

“The task given to us by the Gambian leader required us to take a serious look at key constitutional issues relative to the present and future generations. In other words, what is best for this country today and going into the future so that both the present and future generations are governed by the same rules, and such that an amendment of the constitution will only be necessitated by the most exceptional of circumstances,” he said.

According to him, in performing its functions, the CRC was required under section 6 (2) of the CRC Act to be guided by certain principles which are (a) to seek public opinion and take into account such proposals as the CRC considered appropriate; (b) to review the current Constitution of 1997; (c) to adhere to The Gambia’s values and ethos; and (d) to safeguard and promote The Gambia’s existence as a sovereign independent state and also continued existence as a secular state whereby all faiths are treated equally and fairly and encouraged to foster national cohesion and unity.

“The CRC was required under section 6 (2) of the CRC Act to be guided by the separation of powers, national unity, cohesion and peace and periodic democratic elections that are based on universal adult suffrage, including term limits for occupying the Office of President,” he said.

In relation to all of these matters, he noted that the CRC Act required the CRC to afford all Gambians, both at home and abroad to the extent feasible; to have the opportunity to freely express their opinions and make suggestions on matters they feel should be considered in the constitution.

“The CRC was empowered (where it considered it necessary) to invite persons to appear before the Commission to make representations on subject matters of their choice or on topics specified by the Commission,” he told the president.

He revealed that the CRC has throughout the performance of its functions and exercise of the discretionary powers vested in it under the CRC Act, adhered to the statutorily established functions and exercised its discretionary powers in a fair and balanced manner, “bearing in mind at all times matters that it considered to be in the best interest and future of The Gambia.”

We should discard regionalism