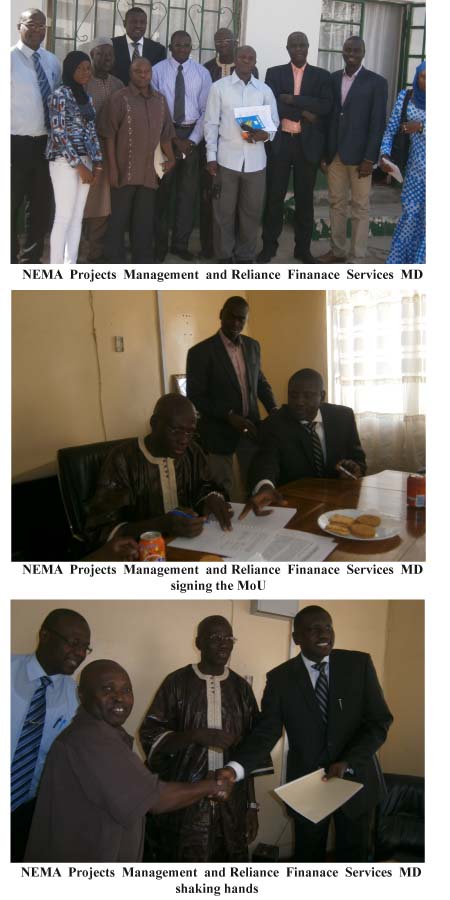 The National Agricultural Land and Water Management Development Project NEMA under the ministry of agriculture on 17 February 2014, signed a memorandum of understanding with the Reliance Financial Services a non-banking financial institution at a ceremony held at the Nema Project conference hall.

The MOU was signed on behalf of reliance by its Managing Director, Mr Babuccarr Khan and NEMA project coordinator, Mr. Momodou Gassama.

The MOU among other thing, would build on the capacities of NEMA targeted beneficiaries through enhanced production techniques, access to mechanized farming inputs, strong financial and business management skills, improved sales techniques and a change in the quality of their livelihood.

The MOU also stipulates the partnership between the two parties to provide funding opportunities for the Capital Investment Stimulation Fund, which is a tripartite arrangement that provide a matching grant to group and individual SMSE along the rice and vegetable value chain.

Speaking at the signing ceremony, the managing director of reliance financial service, Babucarr Khan expressed delight to be associated with this very important agreement between the two institutions.

He noted that this was the first of its kind that his bank signed a MOU with the Ministry of Agriculture through the NEMA project, but added that this was the second time reliance financial services is signing MOU with other institution like EM Holding Poultry Enterprise at Farato.

According to the MD, Reliance Financial Services believed that as a financial institution was to serve the majority of the Gambian population and more importantly their cooperate values to make sure that people use financial services to support government in ensuring that poverty alleviation are eradicated in the best possible way.

“To effectively have possible impact on the life of the average Gambian, people have to invest meaningfully, wisely and sustainable in the agricultural sector,” Mr Khan said.

He added that the reason why they choose to partnership with the NEMA, was because of the employment agriculture create and by far the productive sector in this country.

He further stated that this was why within the project, IFAD and the Gambia government developed the NEMA project in order to address these gaps in term of the allocation of the much needed access to finance in this sector.

The managing director also said there is a need to address the capital investment and also the need for market linkages which was very key and it was where the whole value chain production came into play.

Mr Khan said his institution aim of partnering MOU with NEMA project was to work hand in glove with the government under the public - private sector initiative to compliment government effort by using the capital investment stimulation fund.

He commended NEMA Project for marking a big shift in the way farming was view in this country from substance to commercialize farming.

He added that there are bill of benefit that the NEMA Project is going to deliver, so therefore, Reliance Financial Services are very proud to be the first financial institution to have been identified in this national endeavor as Gambian, to use the financial service to reach out to the majority and the under bank, as well as, objective of boosting their income level and also to boost overall production level while contributing to national food security to the majority of the people thereby eradicating poverty.

He seized the opportunity to thank the entire NEMA Project staff and the CPCU for singing this MoU and reassure his bank commitment in implementing the MOU for the best interest of the Gambian population particularly the farmers.

Sherifo Bojang, the deputy permanent secretary, Ministry of Agriculture, said by providing asset acquisition loans at attractive interest rates would surely drive the economy to higher heights, to not only compete with frontier markets but join the BRICs, Brazil, Russia, India, China and South Africa as an emerging market.

He went on to said that the government of the Gambia need to ensure smallholder farmers especially women-youth could access new sources of credit and equity, and that they are not squeezed out by large agribusiness.

Mr Bojang said government could encourage the creation of cooperative, provide technical support and help training with the development of new seed varieties, in road and water system and protect against predatory investors.

He noted that the NEMA project is creating such opportunities for both small and medium size enterprise to upscale and increase production by providing access to finance for equipment acquisition, build their technical capacitiesand invest in the infrastructure of land and water system where it is most needed.

He also expressed gratitude and appreciation to the management of Reliance Financial Services for accepting their invitation to join the scheme from day one, when they first approached them and introduced the scheme.

This demonstrates the visionary leadership that the institution had, he said, while advising both parties to respect and live up to this document that they all worked.

Momodou Gassama, NEMA project coordinator spoke the importance attached to the MOU with a financial institution, noting that the singing of the MOU was a step in the right direction and commended the Reliance Financial Services for joining them in ensuring that farmers have access to finance.