A multi-million Dalasi Eco-tourism projects, funded by the National Environment Agency (NEA) through its Global Environment Facility (GEF) is currently under construction at Tanji Bird Reserve in Tanji.

When completed it will help residents in Tanji, -Town and Madiyana to be aware of their immediate environment and the benefits they can derive from it, while protecting the biodiversity.

The goal of the project is to develop and pilot a range of effective copying mechanisms for reducing the impact and vulnerability of the climate change in vulnerable coastal communities, and to also design Eco-Tourism project, which will help promote environmental protection.

The reserve is a Ramsar site and was gazetted in 1993 as the fifth protected area in the country. It is an important area for birds, including the residents and migrant species.

Speaking to journalists at the site after a conducted tour of the camp and the reserve, Mr. Alpha Omar Jallow, the Construction Director said that the project when completed would be managed by the villagers.

Mr. Jallow told environmental journalists that the first phase of the project will comprise four lodges and it will last for two months, while the second phase will consist of fifth lodges, a conference hall and a restaurant.

The Site Director further revealed that the third project will include a water and electricity supply which should be tapped from the main Tanji, Ghana Town Main Extension.   He pointed out that the style of the lodges will be a dome house.

He said the reason for choosing earthwork type is to reduce the importation of non-environmental friendly building materials into country.

The National Co-ordinator of ACCC, Mr. Dodou Trawally asserted that this project is a follow-up to the adaptation of the coastal and climate change (ACCC) project.

He said in the coastal villages 50 percent of the people eke out a living from fishing.

The Alkali of Brufut, Alhagie Yunsa Sanneh and Mr.Lamin Manneh of the Department of State attended the tour for Wild Life. 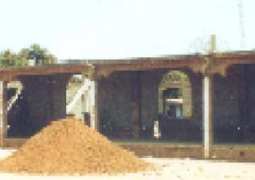