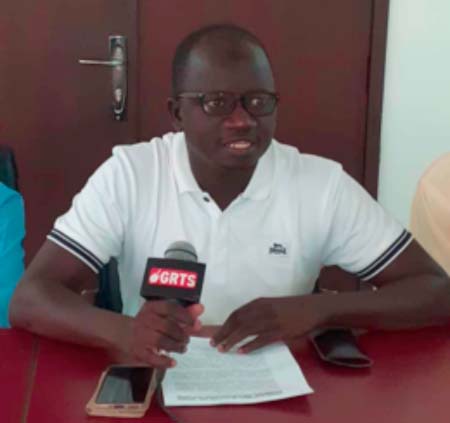 Executive Director of the National Environment Agency (NEA) has called on refrigeration technicians within Central River Region to be committed and redouble their efforts against the rapid depletion of the ozone layer as the refrigeration and air conditioning subsector is experiencing a lot of transformation in terms of technology and the introduction of new refrigerants  in a bid to replace the ones that are not only Ozone Depleting Substances (ODS) but are potent greenhouse gases that contribute to the warming of the earth.

Dodou Trawally revealed that tools and equipment that technicians use is to recover refrigeration that do not only deplete the Ozone layer but contribute to the warming of the earth that can result to dire consequences like the melting of polar ice and subsequent flooding of our homes and agricultural land. He told participants that at the end of the training, they would be introduced and exposed to alternatives like Hydrocarbon 290 for air conditioning systems and natural refrigerants like CO2, water, etc. as oppose to those refrigerants that contribute to the warming of the earth.

“The challenge we now face is the lack of alternatives and as technicians you should encourage the importers of refrigerants to start importing the alternatives to Hydro-Chloro-Flouro-Carbons (HCFCs) so that the Gambia can meet the 2030 phase-out target.” Dodou pointed out, reiterating that we have to face the challenges together and holistically for the fact that the cost involve in converting to ozone friendly refrigerants cannot be carried out by the government alone but by all relevant stakeholders.

Calling on the public in general and technicians in particular to play positive role, Dodou Trawalley further disclosed that “All of us have a role to play in reducing the production and consumption of such refrigerants that are threatening our survival and our very existence on earth. As technicians and major stakeholders in the servicing sector, you should encourage end-users to convert to Ozone friendly refrigerants which is now available in our markets and can be used in our air conditioning systems. Importers also need to support us by importing such alternatives to gradually phase out the said refrigerants”.

As Article five (Parties) countries, he said it is important to note that we have to adjust to the compliance requirements of the international agreements like the Vienna and the Montreal protocol on substances that deplete the Ozone Layer, and we have to be committed in ensuring that new technologies are adopted for a cleaner environment. This, he said is a challenge all of us have to face, but with some political support from Government and donor partners like the United Nations Environment Programme (UNEP), United Nations Industrial Development Organization (UNIDO) and Global Environment Facility (GEF) we are assured of compliance.

In his welcoming remarks, the Deputy Governor of CRR Omar Sey, buttressed that this training is timely as environmental issues are currently on top of the global agenda. Describing technicians as the greatest stakeholders in the front line in the fight against Ozone Depleting Substances, Deputy Governor revealed that refrigerants that contribute to the warming of the earth or a potential contributor to greenhouse gas should not be used by the technicians. This is more of a reason why the need to build your capacities in alternative technologies and innovations in the refrigeration and air conditioning industry.

He further thanked the NEA for bringing an answer to such a laudable training needs to his Region of which he and the Governor Alh. Abba Sanyany appreciated. “Some of you have already attended similar training programmes but you still need to know that new technologies are emerging and alternative refrigerants are also being introduced and tested in our markets. Your customers including us would count on you on the safety use of such refrigerant as some of them are highly flammable” He jagged.