A four-day national oil spill contingency simulation workshop on The Gambia is underway at the Paradise Suites Hotel.
The forum is being organised by the National Disaster Management Agency (NDMA), in collaboration with Global Initiative for West and Central Africa (GI-WACAF) and International Petroleum Industry Environment Conservation Association (IPIECA).
In declaring the four-day workshop open, the minister of Petroleum, Tenengba Jaiteh, on behalf of the Vice President who also doubles as the chairperson of the National Disaster Governing Council, welcomed the experts from IMO and IPIECA to The Gambia.
She said to fully appreciate the dire need for the preservation of the human and ecological environment as well as the general marine environment, one needs to recognize the serious potential threats posed to the marine and local environment by oil pollution incidents involving ships, offshore units, seaports and oil exploration and production facilities both onshore and offshore.
Minister Jaiteh said that it is important to be very much cognizant of existing international standards and practices in dealing with maritime safety and maritime pollution prevention.
“It is in line with that The Gambia Government in 2011 through the efforts of the National Disaster Management Agency (NDMA) and its partners, developed The Gambia Multi-hazard National Contingency Plan in which oil spill as a major hazard is clearly incorporated,” she said.
She added: “Disaster Risk Reduction (DRR) map out roles and responsibilities in emergency preparedness and response, standard operating procedures for emergency response, scenarios, triggers and early warning indicators, possible impacts as well as response and preparedness actions amongst other.”
Minister Jaiteh called for proper transportation of petroleum products to and from depots, factories, and retail outlets, to be properly monitored to comply with national standards and procedures currently being developed by her ministry.
She said the identification of a possible oil spill response plan is also relevant within the context of the oil exploration programme of The Gambia even though special contingency planning and response mechanisms are being developed for this activity by her ministry and the petroleum exploration companies.
“The Gambia Government is fully cognizant of the need to shift away from crisis management to risk reduction and management and the development of the contingency plan as highlighted above and the specifics of the plan are a clear indication and demonstration of our collective will and resolve to anticipate and effectively respond to any emergency and disaster-related to oil spill in The Gambia,” she said.
For his part, the executive director of the NDMA, Essa Khan, said the workshop is the first of its kind to be held in The Gambia with such a very important simulation, adding that it came at the right time.
“We are all aware that The Gambia in 2011 finalised a multi-hazard contingency plan and in any disaster preparedness and response, the first thing you need to look at is to have a national contingency plan, which is a very important instrument for emergency preparedness and emergency response and in the absence of a plan, you don’t have a framework and in the absence of a framework, you don’t have a direction and when you  don’t have a direction in the event there is oil spill, the impact will be greater than if you have a plan,” the NDMA boss said.
“At the NDMA we have identified five major hazards in The Gambia that we need to look at, to address so that we can be able to control those risk factors that are posed by those hazards,” he said.
He named those hazards as flood, wind storm, disease outbreak, oil spill and population movement.
He also noted that it is important for people to understand that addressing oil spill hazards is more critical than addressing the other hazards.
John Ostergaard Consultant on behalf IPIECA/IMO extended his appreciation to the government and the people of The Gambia for hosting this important workshop, in particular to the NDMA officials of The Gambia. 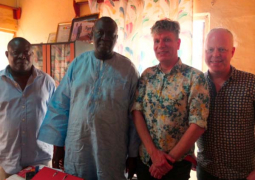