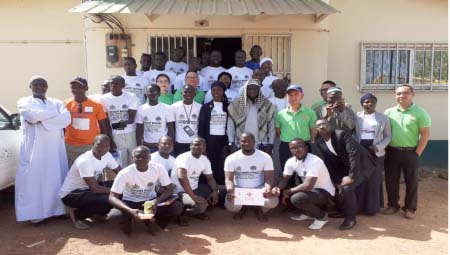 The Gambia-China Cooperation Friday ended a weeklong training of trainers on agricultural skills for Agricultural Science Teachers Association of The Gambia (ASTAGAM).

The training which was held from 24th to 28th February at the agriculture department office in Sapu, Central River Region was meant to enhance knowledge and skills of agricultural science teachers across the country.

Agriculture does not only employ of Gambians but also contributes greatly to the country’s GDP.

The training was funded by Gambia-China Cooperation with great intention of bolstering agriculture science teachers with agronomy and other farming skills, which include breeding vegetable seedling technology, making and using compost fertilizer and modern agricultural production practices.

Landing Saidyleigh, principal agriculture officer of Central River Region-South hailed the Chinese technical team for the gesture and called on participants to utilize the skills they learned to better agriculture and food security in The Gambia.

Fatou A Jeng and Alpha Bah - vice president of Agricultural Science Teachers Association of The Gambia and public relations officer of the association both reiterated the importance of building capacities of teachers, saying that they play a key role in molding students into future agriculture entrepreneurs and officers.

Governor of the Region in his remarks challenged beneficiaries of the training to be steadfast in working towards developing Gambia’s agriculture sector. He also applauded the People’s Republic of China for the gesture

Central River Region-north Agriculture Director, Famara Trawally also made remarks at the closing of the training.