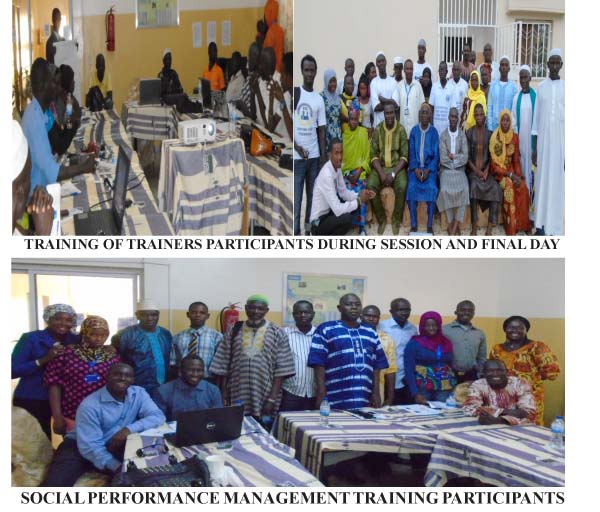 Capacity building is of great importance to any organization in the world and The Gambia credit union movement is not an exception. Education and training is a long-term investment which have the power to change the direction of the whole universe.

For a vibrant and sustainable credit unions development in The Gambia, the capacities of the workforce, volunteers and stakeholders need to be built. Therefore, government, the private sector and donoragencies needto work together to consolidate theirs efforts to build capacity across all sectors in particular the cooperative movement.

The National Association of Cooperative Credit Unions of The Gambia (NACCUG), the apex body for credit unions in the Gambia, believes that developing capacity is vital in ensuring safe and sound credit unions in the country. Education and Training is a sure way of bridgingthe gap between the poor and the rich.

Thus, NACCUG in 2012, with financial and technical support from the Irish Aid and the Irish League of Credit Unions Foundation (ILCUF) developed a financial literacy manual to be used as a training tool for credit union members and non-members alike.

Financial literacy focuses on supporting credit union members to have the ability to use the knowledge and skills to make good decisions regardingsavings and borrowing.Given the successes registered a new project financed by the Irish Aid through ILCUF was launched in June 2015.

The main aim of the project is to promote economic growth and inclusive development by providing sustainable member-owned financial services to poor rural communities.

One of the components of the project is capacity building on Financial literacy, Graduation Microfinance and other cross-cutting issues like gender and HIV and AIDS. Social Performance Management is another aspect of the project which will be implemented in more than 50% of the credit unions in The Gambia.

NACCUG strongly believes in the inclusive finance agenda and continues to direct her efforts to increase outreach in remote areas of the country using graduation microfinance as a techniqueto reach out to the poor and vulnerable community members.

As a growing movement focusing on providing services to the members, we need to be able to measure impact of credit union services on the lives of the people they serve. This and many more reasons brought about the introduction of Social Performance Management in credit unions in The Gambia.

On the 19 October 2015, NACCUG organized a two-day Social Performance Management training at its head office in Bakau. The aim of the training was to enhance the understanding of board of directors and employees of credit union on social performance management and introduce the social performance assessment tool.

Eleven (11) participants from six credit unions in the Kanifing Chapter were trained on social performancemanagement and planning.The training also tried to shed light on the differences between social performance and social responsibility. Although the two are usually confused by many, there is a subtle difference between the two.

Social responsibility is the commitment of the stakeholder to be accountable for their own actions and to ensure that their activities do not have negative effect on partners and the environment while social performance goes a step further, in that, stakeholders strive to fulfill a social mission that will bring social and economic benefits to members and their families.

This training will enabled participating credit unions to pave a new way in which they can assess the effectiveness and the impact of the services they provide to their members. With the philosophy of “credit union happy family”, “happy family credit union” every member of the credit union satisfaction matters in the attainment of the social performance objectives.

In the same vein, NACCUG organized another four-day Training of Trainers (TOT) on Graduation Microfinance, Financial Literacy and Gender. NACCUG intend to reach to the poor people in the rural areas using the Graduation Microfinance concept, it was important toutilizethe credit union setup in the communities.

Thus the focus of the training was to equip the community volunteers to identify and roll out financial literacy training to the identified solidarity groups in their respective communities. Twenty- five participants were trained to roll out the training to thirty-six (36) solidarity groups totaling to 540 Graduation Microfinance members in north bank chapter, Bwiam chapter and Brikama chapter respectively.

During the training, participants were introduced to the concept of gender with a view to cascading the knowledge gained in their communities. Gender is one cross-cutting issue with lots of misconceptions. To clarify these misconceptions and to put the term gender in its right perspective, NACCUG invited a gender specialist, Mr. Sheikh Omar Fye, gender lecturer at the University of The Gambia to facilitate the session on gender.

Mr. Fye sent home the difference between Feminism which is purely female bias and Patriarchy- male bias, he told participants that emphasis should be placed on gender mainstreaming and equality, these two terms offers a pluralistic approach that values the diversity among both sexes.

Sex, he said is not the same as gender but the two are interconnected. To encourage women participation in leadership and create awareness on the women’s act, Mr. Fye did a presentation onthe women’s act 2010 and women leadership. The participants were able to get first-hand information from the gender expert in The Gambia.

On a final note, it is important to note that the credit union movement in The Gambia has done a substantial work towards capacity building of credit union members to ensure safety and soundness.

As a way of complementing the government’s efforts in the fight against poverty and social exclusion, NACCUG is supporting the training of refugees and the physically challenged, and is also helping them access financial services through the credit union system. This initiative is carried out in partnership with UNHCR and the Gambia Federation for the Disabled, respectively.

Previous:
Joint Statement ahead of the International Day for the Elimination of Violence against Women, 25 November 2015
Next:
Trial for obtaining money by false pretence adjourned