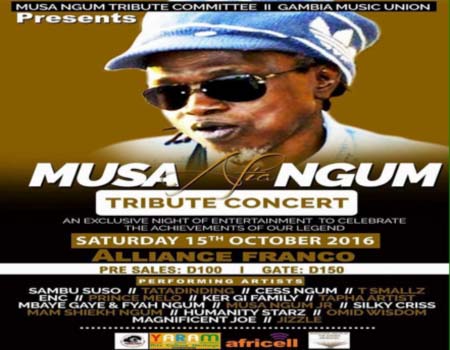 The tribute concert for the late Musa Afia Ngum was held on 15 October 2016, at the Alliance Francaise along Kairaba Avenue.

Ngum died while on a tour in Senegal, where he performed alongside his son, Yusupha Ngum alias Jollofman, and Omar Pene at the club Just For You on 10 October.

He collapsed and was rushed to Dakar’s Le Dantec Hospital in the early hours of Sunday, and was later pronounced dead.

Shortly after the demise of the veteran musician, Gambians both home and abroad setup ‘The Musa Ngum Tribute Committee’ to help sustain his legacy and raise funds to support his family.

The project started with the establishment of a Gofundme account to raise funds for the family, followed by the production of two tribute songs; one of which was released in February of this year and another was released on the tribute concert night.

The committee raised D35, 000 through their Gofundme account from individual donations.

The final phase was to organize a tribute concert in October, to coincide with the anniversary of Musa’s death.

The committee wishes to thank everybody who contributed in one way or the other towards the success of this project, especially those who contributed financially, and the musicians who participated in the tribute songs. 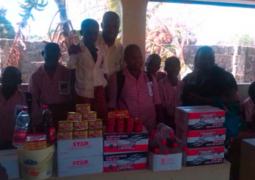