As the crusade against forest intruders intensifies, seven more men were recently convicted by the Upper Fulladu District Tribunal in the Central River Region, presided over by Chief Biran Baldeh.

The convicts were Salifu Ceesay, Katim Sarr, and one Mustapha, Essa Suso, Amadou Jallow, Amadou Sillah, and Alieu Ceesay all convicted after they admitted to the charge of illegal felling of trees.

All the convicts asked for forgiveness, saying that they are all family members, and promised never to do it again.

In his ruling, Chief Biran Baldeh told them that family pressure should not warrant them to destroy the forest, as the importance attached to the forest could not be overemphasized.

Amadou Sillah and Alieu Ceesay were each fined D3,800 in default to serve two years in prison.

Cherno Gaye, the Regional Forestry Officer in the Central River Region South, advised the people to desist from felling trees in the forest, saying that people should now realize the importance of the forest. 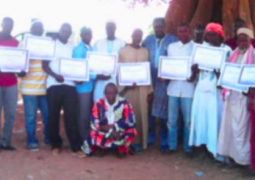