Modou Sarr’s brace was enough to give Gambia’s FA Cup champions Gamtel two crucial goals in their net as they lost 4-2 to Tunisia side Club Sportif Sfaxien on Sunday.

But determined telecommunications side responded with two crucial away goals to bang on to help fuel their dreams of making it pass this level of the qualifier when they host CSS in two weeks’ time.

CSS opened the scores in the 29th minute through Taha Yassin Khenissi but Modou Sarr in the 63rd minute changed the scores to 1-1.

First, Taoufik Salhi has allowed his team to take the advantage from the penalty spot (71) before and Taha Yassin Khenissi Ghazi Chellouf increased the gap to three goals with two projects signed at the 75th and 77th minutes.

The match could have taken a new look after the fourth goal, but Modou Sarr, once again, was able to reduce the time for a new brand for Gamtel by converting a penalty conceded by Hamdi Kasraoui stupidly.

The second leg matches have been fixed for the weekend of April 5-7 with the winners advancing to the 1/8th round. 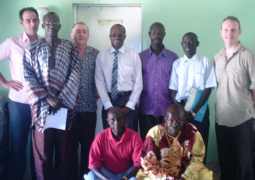