Dr. Mariatou Jallow, Minister of Health and Social Welfare on the 26th of May 2009, received two ambulances one sophisticated and fully equipped ambulance and the other ambulance an ordinary one, two incubators, bandages and some jibs from Charity March a nonprofit making organisation from .

Speaking at the handing over ceremony held at the Atlantic Hotel in , Dr. Jallow commended the President for putting health top on his agenda. "We are indeed grateful to the President who always wants the best for the country" she enthused.

In light of this assertion, Dr. Jallow further expressed the country's need in acquiring both river and air ambulance since the country is divided by a river and to evacuate our patient by air if possible to reduce maternal mortality and child mortality in the country.

She further assured that the donated items will be put into where it's needed most and posited that people will be trained to handle the ambulance properly.

The head of the mission Charity March, Tamas Welsz said that this gesture is as a result of contributions from 20 to 35 members who are businessmen and once worked in and other parts of the continent. Welsz revealed that this is the first time Charity March are visiting The with the intention to help people since health and the welfare of the people is so pivotal to the leadership of this country. 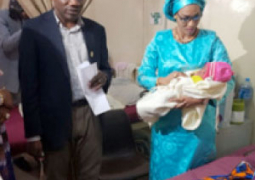