The effects of female genital mutilation on women and babies during childbirth.

The study, which provides the first reliable evidence that female genital mutilation can adversely affect birth outcomes, was undertaken by African and international researchers, including Associate Professor Emily Banks from the National Centre for Epidemiology and Population Health at Australian National University.

The study found that women who have had Female Genital Mutilation (FGM) are significantly more likely to experience difficulties during childbirth and that their babies are more likely to die as a result of the practice.

Complications include the need to have a cesarean section, dangerously heavy bleeding after the birth of the baby and prolonged hospitalization following the birth.

The degree of complications increased according to the extent and severity of the FGM.

According to the WHO, FGM is a common practice in a number of countries around the world, and over 100 million women and girls are estimated to have had FGM. The study used a three level scale set out by the WHO on FGM severity.

In the case of cesarean section, women who have the most severe form of FGM will have on average 30 per cent more C-sections compared with those who have not had any FGM. Women affected by severe FGM are 70 per cent more likely to suffer sever bleeding after birth.

The researchers also found there was an increased need to resuscitate babies whose mother had experienced FGM, and the death rate among babies during and immediately after birth is also higher.

In all, the study estimated that in the African context an additional one to two babies die per 100 deliveries as a result of the practice.

“This collaborative African study provides the first reliable evidence on the impact of FGM on complications during childbirth, and shows that the practice is likely to be responsible for large numbers of infant deaths and an increased burden of maternal illness, affecting millions of deliveries,” Associate Professor Banks said.

FGM may place women at higher risk of problems during pregnancy and childbirth, which are more common with the more extensive FGM procedures.Infibulated women may try to make childbirth easier by eating less during pregnancy to reduce the baby’s size. In women with fistulae, it is difficult to obtain clear urine samples as part of prenatal care, making the diagnosis of conditions such as pre-eclampsia harder.[75] Cervical evaluation during labour may be impeded and labour prolonged or obstructed. Third-degree laceration (tears), anal-sphincter damage and emergency caesarean section are more common in infibulated women.

Neonatal mortality is increased. The WHO estimated in 2006 that additional 10–20 babies die per 1,000 deliveries as a result of FGM. The estimate was based on a study conducted on 28,393 women attending delivery wards at 28 obstetric centres in Burkina Faso, Ghana, Kenya, Nigeria, Senegal and Sudan. In those settings all types of FGM were found to pose an increased risk of death to the baby: 15 percent higher for Type I, 32 percent for Type II and 55 percent for Type III. The reasons for this were unclear, but may be connected to genital and urinary-tract infections and the presence of scar tissue. The researchers wrote that FGM was associated with an increased risk to the mother of damage to the perineum and excessive, as well as a need to resuscitate the baby, and stillbirth, perhaps because of a long second stage of labour

FGM harms women’s physical and emotional health throughout their lives. It has no known health benefits.The short-term and late complications depend on the type of FGM, whether the practitioner had medical training, and whether she used antibiotics and unsterilized or surgical single-use instruments. In the case of Type III, other factors include how small a hole was left for the passage of urine and menstrual blood, whether surgical thread was used instead of agave or acacia thorns, and whether the procedure was performed more than once (for example, to close an opening regarded as too wide or re-open one too small).

Common short-term complications include swelling, excessive bleeding, pain, urine retention and healing problems/wound infection. A 2015 systematic review of 56 studies that recorded immediate complications suggested that each of these occurred in more than one in ten girls and women undergoing any form of FGM, including symbolic nicking of the clitoris (Type IV), although the risks increased with Type III. The review also suggested that there was under-reporting.[71] Other short-term complications include fatal bleeding, anaemia, urinary infection, septicaemia, tetanus, gangrene, necrotizing fasciitis (flesh-eating disease)It is not known how many girls and women die as a result of the practice, because complications may not be recognized or reported.The practitioners’ use of shared instruments is thought to aid the transmission of hepatitis B, hepatitis C and HIV, although no epidemiological studies have shown this.

Late complications vary depending on the type of FGM. They include the formation of scars that lead to obstruction that may become infected, andformation (growth of nerve tissue) involving nerves that supplied the clitoris. An infibulated girl may be left with an opening as small as 2–3 mm, which can cause prolonged, drop-by-drop urination, pain while urinating, and a feeling of needing to urinate all the time. Urine may collect underneath the scar, leaving the area under the skin constantly wet, which can lead to infection and the formation of small stones. The opening is larger in women who are sexually active or have given birth by vaginal delivery, but the urethra opening may still be obstructed by scar tissue can develop (holes that allow urine or faeces to seep into the vagina).This and other damage to the urethra and bladder can lead to infections and incontinence, pain during sexual intercourse and infertility.

The United Nations General Assembly included FGM in resolution 48/104 in December 1993, the Declaration on the Elimination of Violence against Women. In 2003 the UN began sponsoring an International every 6 February.UNICEF began that year to promote an evidence-based social norms approach to the evaluation of intervention, using ideas from game theory about how communities reach decisions, and building on the work of Gerry Mackie about how foot binding had ended in China.In 2005 the UNICEF Innocent Research Centre in Florence published its first report on FGM.

In 2008 several United Nations bodies, including the Office of the High Commissioner for Human Rights, published a joint statement recognizing FGM as a human-rights violation. In December 2012 the General Assembly passed resolution 67/146, calling for intensified efforts to eliminate it.In July 2014 UNICEF and the UK government co-hosted the first Girl Summit, aimed at ending FGM and child marriage.

UNFPA and UNICEF launched a joint programme in 2007 to reduce FGM by 40 percent within the 0–15 age group, and eliminate it entirely from at least one country. Fifteen countries joined the programme: Djibouti, Egypt, Ethiopia, Guinea, Guinea-Bissau, Kenya, Senegal and Sudan in 2008; Burkina Faso, Gambia, Uganda and Somalia in 2009; and Eritrea, Mali and Mauritania in 2011.[214] Phase 1 lasted from 2008 to 2013, with a budget of $37 million, over $20 million of it donated by Norway.Phase 2 extends the programme from 2014 to 2017.

By 2013 the programme had organized public declarations of abandonment in 12,753 communities, integrated FGM prevention into pre- and postnatal care in 5,571 health facilities, and trained over 100,000 doctors, nurses and midwives in FGM care and prevention. The programme helped to create alternative rites of passage in Uganda and Kenya, and in Sudan supported the (pre-existing) Saleema initiative. Saleema means “whole” in Arabic; the initiative promotes the term as a desirable description of an uncut woman.The programme noted that anti-FGM law enforcement is weak, and that, even where arrests are made, prosecution may fail because of inadequate collection of evidence.It therefore supported the training of 3,011 personnel in eight countries (Djibouti, Eritrea, Ethiopia, Guinea, Guinea-Bissau, Kenya, Senegal and Uganda) in how to enforce the laws, and sponsored campaigns to raise awareness of them.

Further continuation and information’s aboutFGM in the next issues (next Tuesday) in the Point newspaper.

For further information UN, WHO, UNICEF web sites in the Gambia and internationally, In the Gambia NGO’s WASSU, www.mgf.uab.es, Gamcotrap, email: 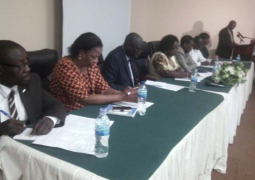