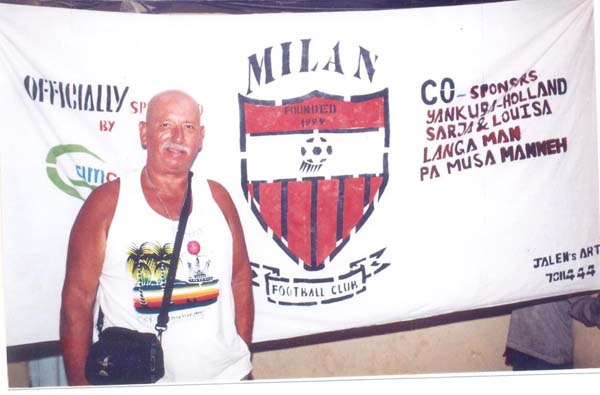 A Dutch philanthropist named Yankuba, recently donated some sporting gears to Milan FC of Tallinding. The items donated included sets of jerseys and balls for the second time.

Speaking at the presentation ceremony held at Tallinding, the Dutch philanthropist who adapted Yankuba as his Gambian name, urged the beneficiaries to perform extremely well in the forthcoming Serrekunda East Nawettan championship and he expressed his willingness in supporting the team whenever the need arises. He advised the team to take their game seriously because it is the fastest way of making people millionaires.

He expressed delight for giving sporting gears to Milan FC and hope that the gesture will go a long way in developing, improving and promoting sports in Serrekunda East and its environs.

For his part, the president of Milan FC, Bubacarr Jallow, applauded the gesture and assured the donors that the  items donated will be properly put into good use.

He expressed his hope that Milan FC will one day travel to and play friendly games in the near future.

In another development, Milan FC will clash with Tallinding United FC in a friendly encounter today at Buffer Zone as part of preparations for the 2009/-10 Serrekunda East Nawettan Championship.