Medina FC have now collected three points in a single game, while Juventus FC are yet to collect a point in one game.

Speaking to reporters shortly after the game, Ansumana Jallow, head coach of Medina FC, said he was impressed and happy with the win, adding that the victory against their neighbours was important for them because they don’t know what will happen in the subsequent games of the group stage to come.

“In football you need to be cautious and work on your game plan,” he said, adding that they respect their opponents because they have a good team and are neighbours.

“The boys stuck to the game plan, which earned us the victory today,” he added.

Asked whether his young team players would be able to cope with the situation as the nawetaan progresses, he said: “Young players are doing well and it is a matter of doing what you are in the field for, to deliver results.”

He noted that it is too early to say they are going for the trophy because the nawetaan is just starting but that they would continue to work hard as the nawetaan progresses.

He finally thanked the fans and urged them to continue the support, noting that the players would do what they are for in the field.

Ousman Jallow, assistant coach of Juventus FC, said he felt bad losing to his neighbours but added: “This is football and we have taken it in good faith.

“They capitalised on their chances while we failed to capitalize on ours, which resulted in our defeat in their hands.”

He added that they prepared both physically and mentally for the game knowing they were coming to face their neighbours.

“We will prepare well for our next game to collect the maximum three points but this is just our opening game of the nawetaan,” he said, adding that last year they lost two of their opening games of the group stages but ended up finishing second in their group.

He stated that his defence line was a bit sloppy, which resulted in them conceding two goals, saying: “This defeat will not affect us at all in our next game to come because we have players in our team.”

He finally urged the fans of the team to be patient while assuring them that they would bounce back in their next game. 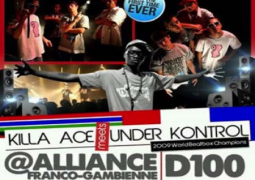