The Gambia for Gold, a fundraising committee tasked with the responsibility of raising the needed funds for the country's national football team’s participation in international championships, has introduced another fundraising system called Telethon.

The committee, headed by Tombong Saidy, will with effect from Saturday 11 December kick start an intensive fundraising campaign on GRTS television geared towards raising funds to finance the preparations of the Gambia national U-17 and U-20 football teams to the two continental tournaments.

Speaking to journalists at yesterday's press briefing at the Ministry of Youth and Sports office in Banjul, Sheriff Gomez has challenged the Gambian populace and all the friends of The Gambia to call and pledge when the Telethon campaign takes center stage tomorrow at the GRTS headquarters in Kanifing.

"We would like all Gambians, all those residing in The Gambia and all friends of The Gambia to call and pledge on Saturday."

"We need a minimum of D15 million to enable the U-17 and U-20 national teams to participate in the African Cup of Nations in January and March in Rwanda and Libya respectively.

"People can participate by calling the numbers that will be displayed on the television screen and pledge in their contributions," the Youth and Sports minister said while making a statement on the telethon fundraising campaign.

"All pledges and contributions will have to be collected by December 31, 2010," the minister said, while urging others to participate by dialing 2222 from any one of the four mobile networks available in The Gambia; that is Africell, Gamcel, Comium and QCell.

As part of the fundraising campaign, The Gambia for Gold, in collaboration with Seaview\Duplex, is organising a fundraising gala dinner at the Seaview Hotel on Friday 31 December 2010 - New Year's Eve, and guests will be entertained by the renowned Senegalese Queen of Mbalahk, Viviane N’Dour, with her band and some Gambian artistes.

The Gambia for Gold therefore urges all Gambians and friends of The Gambia to contribute towards this fundraising effort so that he Gambia national football teams could adequately prepare for the continental tournaments to win the cups for The Gambia.

The Telethon programme starts from 2:00pm to 7:00pm on GRTS television.

70% of government budget should go through public Procurement 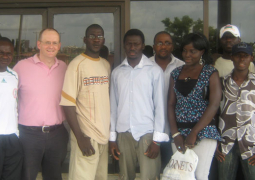