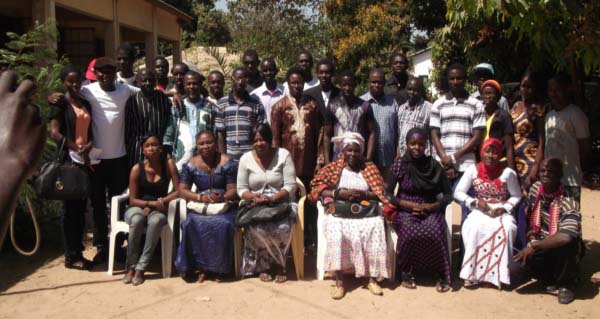 Organised by the Biodiversity Action Journalists-The Gambia (BAJ-Gambia), through funding  from UNDP GEF-Small Grants Programme (UNDEP/GEF-SGP), the grant is meant to implement a twelve-month project on public awareness on ‘Environmental Protection and Mitigation’ nationwide.

The objective of the project is to promote public participation in Protected Area Management of environmental and biodiversity resources for posterity.

Mamadou Edrisa Njie, BAJ social-secretary, said the project is meant to protect and mitigate the environment, working in collaboration with the Gambia Press Union (GPU), National Environmental Agency (NEA), Young Journalists Association of The Gambia (YJAG), MOBSE and other relevant stakeholders across the country.

He noting that since its inception the organization had held a series of awareness and sensitisation programmes in all corners of the country.

A representative from the Ministry of Basic and Secondary Education (MOBSE) Gibril Barry expressed his ministry’s continued determination to work with BAJ-The Gambia.

He explained that with the emergence of climate change and new emerging challenges, there has been a change on the curriculum.

Barry added that climate change, environmental and other issues, such as HIV/AIDS, have been included in the educational curriculum, with the sole objective of changing the mindset of the younger generation.

This programme, he added, cannot be done exclusively by the MOBSE, thus the bold move to sign an MoU with BAJ-The Gambia, taking into account some of the issues they will teach in the curriculum.

He thus hailed BAJ-Gambia for coming up with such a bold initiative.

GPU president Bai Emil Touray, described the training as important, as according to him, the protection of the environment is a collective responsibility.

This, he added, is important for journalists or media practitioners, to enable them play their rightful role in the protection of the environment.

Touray pointed out that as members of society they have a social responsibility which includes providing the public with accurate and progressive information.

He expressed delight at the move taken by BAJ-Gambia, as he implored on the participants to take the training with seriousness. Abdoulie Sawo, department of Parks and Wildlife Management, who doubles as board chairperson of the BAJ-Gambia, said his department is tasked with the responsibility of protecting biodiversity.

The Gambia, he pointed out, has eight protected areas, which he added, represent a few portions of the total landscape.

Despite this, he said, the country has in recent years been faced with some environmental challenges.

As a result, Sawo maintained,  the department is in the process of creating what he called ‘Biosphere Reserve’, a kind of protected area that exists all over the world.

“So in The Gambia we also thought about the Niumi Area that could also be a biosphere reserve, like Delta De Saloum in Senegal,” he added.

He then hailed members of BAJ-Gambia for their foresight and dedication in creating biodiversity.

Sawo also expressed his department’s unwavering collaboration and total support to the media in their effort to manage and protect the country’s biodiversity.

The training, however, was punctuated with presentations on key thematic issues, such as media’s reporting on Climate Governance in Africa, Importance of Social Media in Today’s Society, the Convention of Biological Diversity and wildlife act among a host of others.