The management of Relax Sahel on 22 March 2014 launched an African heritage week programme, at Relax Sahel Country Club, aimed at encouraging the youth to know and be proud of the great African kings, rulers and chiefs, and in particular Gambian leaders.

Mrs Juka Jabang, CEO of the WAIS Education Foundation, in her remarks, said the initiative was the first attempt to encourage students to research, record and preserve the achievements and legacy of African Kings, Chiefs and Leaders.

He congratulated Mr George Gomez, General Manager of Relax Sahel Country Club, for coming up with such an idea and thanked him for involving WAIS in the programme.

Hassoum Ceesay of the National Council for Arts and Culture (NCAC) said most of the history read about The Gambia is written by the Whiteman, who does not mention the bravery and achievements of African leaders.

The Gambia was gifted with very powerful and resourceful kings and chiefs who had great armies.

Mr Gomez said the new research programme will allow the students from Senior Secondary Schools who want to be part of it to research a theme on selected leaders and to divide their research into culture, drama and poetry to be produced over a week in different parts of the country.

It is expected that the event will be the biggest and most popular event in The Gambia annually, he said.

Over a period of 5 years, there will be enough material for the students to publish a book based on their research, he added.

“These books to be published every 5 years will be a factual collection of the achievements of our past leaders to which the students can take great pride and can have Gambian role models,” Mr Gomez disclosed.

The highlight of the launching was a play on Slavery called ‘The Return of The Black Ivory’ by the Drama Group of the WAIS.

The Serrekunda Central Red Cross Link also produced a sound play showing the authority and bravery of a Gambian King.

The first edition of The Gambia Heritage Week will be in 2015.

The programme was renamed Gambia Heritage Week by Mr Gomez. 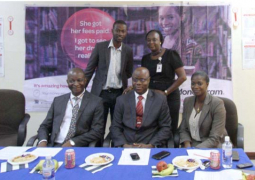