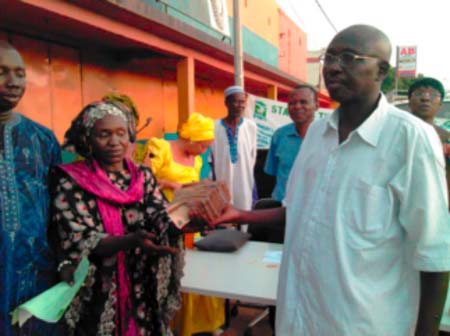 Mattar Gaye, a panel beater from Latrikunda Sabiji, is the first winner of the newly-established Lotto PMU Gambia Limited.

He was presented D60, 055 at a ceremony held at the company’s head office near World Mobile.

Speaking at the presentation ceremony, Mbisin Touray, marketing manageress Lotto PMU Gambia Limited, thanked Gaye for being their first winner since the company was set up on 12 August 2014.

They are only two weeks old in the market, she added, and thanked their customers for patronizing them in these two weeks.

Ms Touray called on the general public, especially lottery players in the country to come forward and have a test of their lottery playing system, which she described as one of the best lottery companies in The Gambia.

She disclosed that last Thursday alone they gave out up to D92,000 to winners. This shows that the company has a promising future for their esteem customers, Ms Touray went on.

The new lottery company has 40 staff members and 100 sales agents within the Greater Banjul Area, and plans to extend services to rural Gambia.

“I used D40.00 to play the jackpot, and fortunately for me I won D60, 055 which was real luck for me and my family members, as well as friends,” Gaye told the gathering.

He used the occasion to call on the general public, especially lottery players within the Greater Banjul Area to play Lotto PMU Gambia Limited if they want instant cash money.

According to Gaye, he has been a lottery player for a long time, winning such an amount from Lotto P.M.U Gambia Limited did not come as a surprise, and he promised to continue playing the lottery.