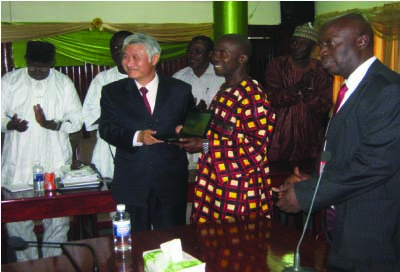 The ambassador of the Republic of China on Taiwan yesterday presented 60 new laptop computers to the National Assembly, on behalf of the Speaker of the Taiwanese Legislative Yuan, Hon. Jin-Pyng Wang.

The brand new laptops were presented at a ceremony held at the National Assembly chambers, witnessed by almost all members of the House.

In presenting the laptops, the Taiwanese ambassador to The Gambia, Dr Richard Shih, said he was pleased to be in the Assembly chambers for the second time.

He said his first visit to the Assembly was when his country’s Assembly speaker visited The Gambia in July last year.

Speaker Wang was overwhelmingly impressed with the work of the National Assembly members, according to Ambassador Shih.

He said: "He asked me to hand over these suitable and modern computers to you in order to enhance your ability to serve the Gambian people."

The laptops donated to the Gambian lawmakers are marked Seashell and are made in Taiwan.

"Though small in size, the computers come with many facilities such as wireless and video camera," he revealed, adding that the laptops "are also very powerful".

The Chief Taiwanese diplomat used the occasion to introduce to the House a Taiwanese ICT specialist who will be visiting the National Assembly on Thursdays and Fridays to boost the IT skills of parliamentarians.

For his part, the honorable Speaker of the National Assembly, Abdoulie Bojang, thanked his Taiwanese counterpart for the gesture.

He also hailed the cordial bilateral ties that exist between the Republic of The Gambia and the Republic of China on Taiwan. Speaker Bojang also praised Taiwan for its democratic credentials.

Delivering the vote of thanks on behalf of National Assembly Members, the majority leader and member for Serrekunda West, Hon. Fabakary Tombong Jatta, described the donation as timely.

"We have been crying for laptops, laptops everywhere and when we said it to Taiwan, we have got it within six months," he said.

He applauded the embassy of Taiwan in Banjul for facilitating the arrival of the laptops, saying the new computers would greatly ease their work.

The master of the ceremony, the Clerk of the Assembly, Dodou Kebbeh, said the Gambian National Assembly has always been championing the cause of Taiwan.