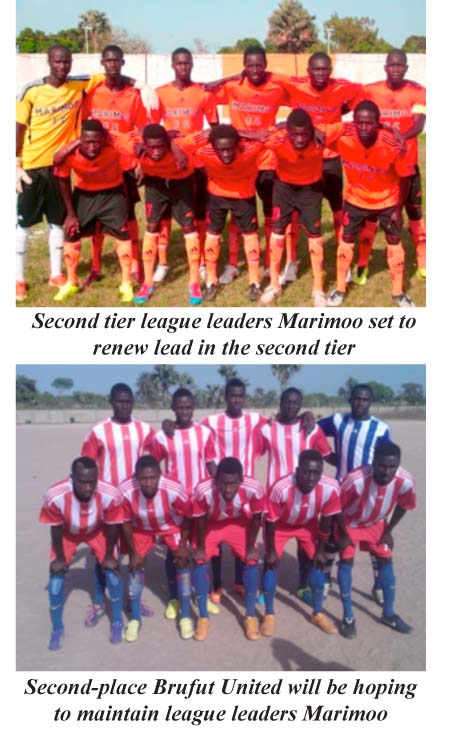 Marimoo and Brufut United are targeting to rejuvenate their lead in the 2015-2016 Gambia Football Federation second division league when league matches resume today, 7 January 2016, after observing Christmas and New Year.

The Manjai-based outfit Marimoo are topping the second tier on goal difference with 7 points in three games, and are set to clash with relegated Interior at the Father Gough Sports Complex in Manjai Kunda on Friday.

The Manjai-based outfit will be targeting to punch Interior to extend their lead in the summit and also fancy their dreams of gaining promotion to the premier tier next season after missing promotion berth to Bakau giant killers Steve Biko last season.

Interior are currently struggling in the second tier, and will be hoping to smash Marimoo to move away from relegation zone and also maintain their chances of regaining promotion to the top flight next season following their demotion to the second tier after their dismal performance in the premier tier last season.

Brufut United will play away to Red Hawks at the Banjul KG5 Mini Stadium on Thursday, the Sanimentereng boys are occupying second spot in the second tier with 7 points in three games.

They will be fighting to defeat Red Hawks to mount pressure on league leaders Marimoo and also keep their chances of regaining promotion to the top flight next season.

Serrekunda East Bi and Blue Star are mid-table in the second tier, and will be expecting to beat each other to keep pressure on league leaders Marimoo and also boost their hopes of gaining promotion to the top flight next season.

The Wellingara-based outfit are third-place in the second tier with 6 points in three games.

They will be fighting to beat BK Milan to recover in contention for promotion to the top flight next season after losing to Lions of Banjul before Christmas and New Year break.