A man called Alpha Bah was recently remanded in custody by the Brikama Magistrates’ Court for stealing from a dwelling house.

According to the particulars of offence, the accused, Alpha Bah, on 7 April 2012, at Bwiam Village, in Foni Kansala District of the West Coast Region, stole from the house of one Elizabeth, a Blok camera marked Cannon valued at D5, 000 and cash amounting to D25, 000, being the property of one Alois.

He admitted to the charge and was subsequently remanded before the case was adjourned till 21 May 2012, for facts and sentences.

In a separate development, one Omar Ngum of Brikama was also recently arraigned at the Brikama Magistrates’ Court for stealing from a person.

Ngum denied the charge and was granted court bail of D150, 000, with two Gambian sureties.

The particulars of offence stated that the accused, Omar Ngum, on 3 May 2012, at Brikama Market, stole a wallet from one Fatou Jawo containing D530, being the property of the said Fatou Jawo. 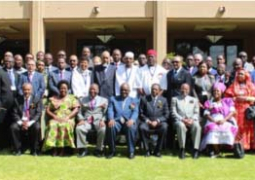