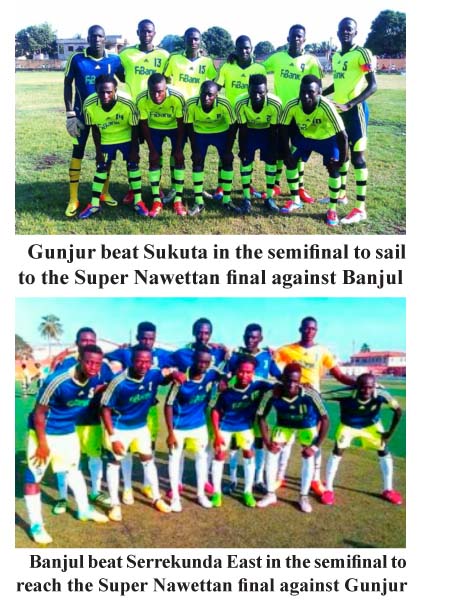 Gunjur on Tuesday kicked Sukuta out to set Super Nawettan final against Banjul on Friday 28 October 2016, at the Independence Stadium in Bakau.

The South boys beat Dembadou boys 4-2 on penalties, after their 1-1 draw in the regulation time in the all-West Coast Region semifinal derby clash played at the Serrekunda East Mini Stadium.

Gunjur lost to Sukuta 1-0 in their final group B tie prior to their Tuesday’s crunch semifinal contest and came all out for revenge against Dembadou boys to advance to the Super Nawettan final for the first time in their history.

Sukutarians made a flying start to the game and dominated Gunjur in all departments in the field of play, and opened the scores through midfielder Omar S. Bah in the 5th minute of the game from an astonishing long-range strike to give Dembadou boys the lead.

Gunjur responded back quickly for an equaliser but could not penetrate Sukuta’s formidable defence line thus the first half ended 1-0 in favour of Sukuta.

Upon resumption, Sukuta dropped their composure in the midfield and Gunjur dominated the game and mount heavy pressure on Sukuta defence line and levelled the scores through midfielder Mbemba Fatty alias Andrea Iniesta in the dying minute of the game from the penalty spot after defender Yusupha Darboe handled the ball inside the eighteen to make it 1-all.

This pushed the game into a post-match penalty shootout, which ended 4-2 in favour of Gunjur.

Elsewhere, Banjul beat Serrekunda East on penalties, after their goalless draw in the regulation time in the other semifinal game played at the Serrekunda East Mini Stadium the same day.