A man was on 27 January 2016 paraded before Magistrate Isatou Janneh of the Kanifing Magistrates’ Court for allegedly assaulting a police officer and damaging a police case file. Police prosecutors alleged that Yunusa Barry unlawfully assaulted one Abdoulie Jobe on his left hand with a broken bottle, causing him grievous bodily harm on 19 January 2016 at Kerr Sering, in the Kanifing Municipality.

It was further alleged that the accused, Yunusa Barry, assaulted a police officer, Corporal 3971 Bojang, in the due execution of his duty on 26 January 2016 at Kololi Police Post in the Kanifing Municipality.

The bill of indictment, which was presented by Sergeant 544 Jaiteh before the court, also stated that the accused on the same day and place unlawfully damaged a police case file bearing diary reference number 45/19/01/16.

His actions, according to the bill of indictment, amounted to committing an offence. He denied any wrongdoing.

Sergeant 544 Jaiteh then applied for an adjournment to call his witness, but said he was opposing bail for the accused.

He told the court that the victim in the case was seriously injured and hospitalized, adding that they were observing his critical condition.

He argued that the relatives and friends of the victim were very annoyed with the accused, and if he was granted bail, he may be attacked by them.

For his security, he urged the court to remand him in custody, adding that he may abscond if granted bail.

However, the accused said he was begging the court to grant him bail, adding that he was detained for nine days at the police station.

He told the court that if he was granted bail, he would always be available for the trial.

Magistrate Janneh, in her ruling, said the reasons for the prosecutor’s opposition to bail were mere speculations.

She stated that it was the constitutional right of the accused to be granted bail, adding that the offence alleged to have been committed by the accused was bailable.

She subsequently granted him bail of D75,000 with two Gambian sureties who should swear to an affidavit of means, and should also be residents in the jurisdiction.

They were required to surrender their ID cards to the registrar of the court. 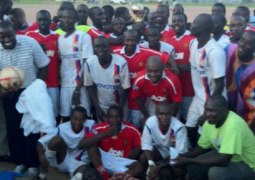