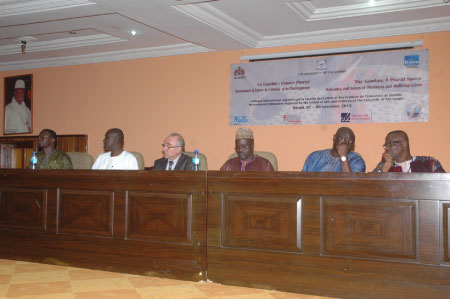 The University of the Gambia has successfully concluded a three-day International Colloquium that brought together experts and participants from Europe, USA and different African countries (including 33 foreign intellectuals).

The conference, which started on Wednesday November 7th, came to a close on Friday, November 9th, 2012. The University of The Gambia organised this international event in partnership with the French Government and the Regional Office of the Association of French Universities (AUF).

The topic chosen for the colloquium was: “The Gambia, a Plural Space: Dynamics and Issues of Otherness and Multilingualism.”

He further stated that the conference was a success, and thanked the participants and facilitators for a job well done. He said on Thursday the delegates and participants stayed until 8pm with no complaints. Dr. Gomez said the presence of these many seasoned scholars from around the globe had made the program enriching. He thanked Youssef Arrif, the head of the French Cooperation, for actively ensuring that all went well. He further expressed the University’s appreciation for what the Director of Alliance Francais did for the program; organising a cultural night with refreshments for all, at no cost to UTG. On a final note, Dr. Gomez wished all the delegates a safe journey home, and apologised for any shortcomings on the part of the UTG.

The next speaker was the Charge d’Affaires, Jean Marc Transon. Among other things, he expressed his delight for the successful completion of the program.

Dr. Omar Jah, started by congratulating everyone for the success of the colloquium.

He said he was there to speak on behalf of the Vice Chancellor, who could not attend the closing ceremony due to other engagements. Dr. Jah extended the “sincere appreciation” of the vice chancellor to all delegates for their hard work.

He quoted an Arab philosopher who said, “we are mirrors of one another.” He said we are made up of what we see in others. If we see them as pure and clean, that is how we are. He said this makes the topic on otherness in the main theme of the program very relevant and important. He said the Vice Chancellor is committed to making this program an annual event.

The final speaker was Dr. Tangara, who spoke in French, and congratulated all participants for successfully accomplishing the tasks at the colloquium. He declared the colloquium closed.