One Lamin Jarju was recently convicted and sentenced to a fine of D1, 500 in default to serve six months in prison with hard labour by the Brikama Magistrates’ Court.

Jarju, who was convicted on charges of breaking into a shop, was also ordered to pay a compensation of D8, 000.

According to the facts as narrated before the court, it happened on 3 March 2012, at Farato Village when the complainant reported to the Brikama Police Station that his shop situated at Farato Village was broken into and the items mentioned in the charge sheet were stolen.

Upon receiving the report, some officers visited the scene, who confirmed the breaking, the facts continued.

The facts also stated that when Pa Sulay Jallow was asked to tell where he got the flash drive from, he said he bought it from the accused.

The accused was later arrested and taken to the Brikama Police Station where he was interrogated and he confessed breaking the complainant’s shop and therein stole the items mentioned on the charge sheet.

He was later cautioned and charged with the offence committed, the facts concluded. 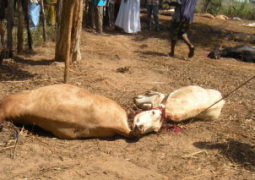