Seedou Bojang, former accountant at the National Drug Enforcement Agency, (NDEA), yesterday told the high court in Banjul that he received money from one Marie Sanneh, the fourth accused person, but she (Sanneh) later retrieved the money from him.

He was speaking in his defence, in the criminal trial involving Ibrahim Bun Sanneh and others, before Justice Emmanuel Amadi.

The alleged offences include conspiracy to commit felony, stealing by person in public service, aiding and abetting, unlawful possession of firearm, unlawful possession of live ammunitions, concealment and destroying of evidence, official corruption, abuse of office and committing economic crimes, obtaining money by false pretence, and making document without authority, among others.

Seedou Bojang, who is the fifth accused person in the trial, told the court he was the former accounting officer at the NDEA and his rank was Assistant Superintendent, and that he is currently detained at the maximum security wing at the Mile 2 Prison.

He said there was a pending drug case in 2008, involving one Babucarr Jatta, and it was in connection with that case that Ibrahim Bun Sanneh introduced him to a lady called Marie Sanneh, the 4th accused person.

He said Bun further told him that the 4th accused was here for a payment in respect of one Babucarr Jatta’s case, adding that he enquired about the amount of the money in question and Bun, who was the director, told him it was D100, 000.

“I told Bun, why can’t she wait until the amount was completed, but Bun argued that the said money should be paid, and the balance of the money would be paid later,” the fifth accused told the court.

He added that the said money was deposited and a temporary receipt was given to the 4th accused adding that, after three months, the 1st accused invited him into his office where he found Marie Sanneh, the 4th accused sitting.

“The then director asked me if I recognise the lady sitting. I answer in the affirmative, and he further told me that she was here to pay D40, 000, and there would be a D10, 000 balance. The 4th accused paid the money and Bun asked me to receive the money, which I did,” the fifth accused told the court in his defence.

He said Bun further told him that the uncle of Marie Sanneh wanted to pay the money in full, adding that he went with the 5th accused to his office and gave her back the D140, 000, and asked Marie to signed for him in order to confirm that she received money from him.

He told the court that he could recognise the diary in which the 4th accused had signed.

His defence counsel L.K. Mboge, at that juncture, applied to tender the diary as a defence exhibit.

When the said diary was shown to the 4th accused, Marie Sanneh, she denied seeing the said diary, adding that she saw the diary on the 8th April 2010, when she was called at the NDEA office where she was detained.

However, the diary was admitted and marked as a defence exhibit.

WHO RD Speaks on Role of Traditional Healers 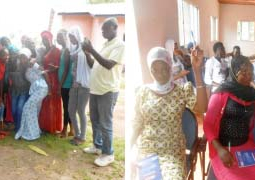