Reliable sources reaching The Point newspaper have indicated that a middle-age man was stabbed to death in Fullabantang village, in the Central River Region.

The deceased, Sulayman Wanja, was reportedly stabbed by his elder brother’s wife, one Fatou Marong, with a knife, leading to his untimely death.

The circumstances behind the incident were not established at the time of going to press but the incident occurred on Saturday 12 November 2016.

According to our sources, the late Sulayman Wanja was rushed to Bansang Hospital where he received treatment until the next day Sunday 13 November 2016, when he was pronounced dead at the hospital.

When contacted, the police public relations officer, Inspector Foday Conta, confirmed the story, saying Sulayman Wanja was pronounced dead at the Bansang Hospital on Sunday after being reportedly stabbed with a knife by the wife of the elder brother to Sulayman.

According to police PRO Conta, the late Sulayman Wanja had a fight with his elder brother’s wife, and then she stabbed him with a knife, which led to his untimely death.

He said the dead body was then rushed to the Edward Francis Small Teaching Hospital to establish the circumstances.

The suspect, Fatou Marong, was arrested and is with the police helping them in their investigation.

Meanwhile, our source added that the late Sulayman Wanja was laid to rest on Tuesday evening at his home village in Fullabantang. 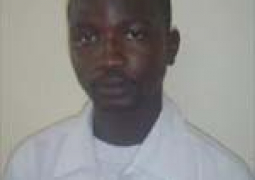