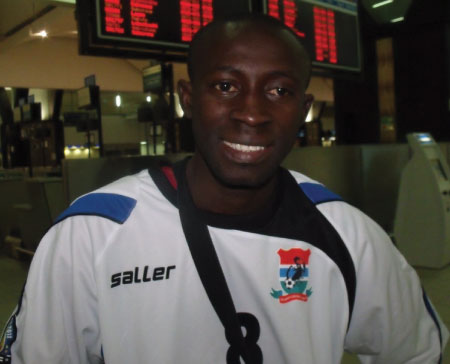 Exactly five days after returning home from Johannesburg, South Africa, where he joined a host of other sports reporters across the globe on a two-week Caf African U-20 Youth championship media coverage, The Point Newspaper’s deputy sports editor Lamin Drammeh Tuesday evening added another award to his cabinet as he received the award for the most deserving sports writer of the year by the Gambia Press Union (GPU).

Drammeh, who was awarded the country’s most outstanding male sports writer of the year 2009 voted by The Sports Journalists Association of the Gambia last year, was among three Gambian journalists who were decorated with three different awards by the GPU.

The award ceremony held at the Tango conference Hall in Kanifing was part of the celebration marking the World Press Freedom day attended by an impressive number of dignitaries and other interested parties.

The Gambian pen pusher, who also won a high-profile Fifa award during the last year’s AFP-FIFA media training course in Dakar,  was not present at the award ceremony but Sainabou Kujabi, chief sports editor of The Point Newspaper, was in attendance to receive the accolade on his behalf.

Two other awardees were Foroyaa Newspaper’s Fabakary B. Ceesay, who bagged an accolade for being the best investigative journalist of the year, while Drammeh’s colleague at The Point Newspaper in the name of Dawda Faye, senior reporter at the country’s most authoritative newspaper, was also decorated with the best health journalist of the year award.

Each awardee went home with a quality Sony Digital Camera, (12.1 Mega Pixels) in recognition of their tremendous services in the aforementioned areas of journalism over the year.

This is the first time the GPU has come up with such awards for Gambian journalists since its inception in 1978, and has brought the total number of awards for Drammeh to three within a three-year journalism period.

“I am extremely delighted to add another great award to my award cabinet (third award) but the credit this time should go to my humble boss Sainabou Kujabi, who presented two of my best stories to the award committee of GPU while I was in Johannesburg, South Africa, for the 17th Edition of Caf U-20 Youth championship,” Drammeh told Pointsport in an interview.

He used the platform to extend profound thanks and appreciation to the GPU for giving him such a great honour.