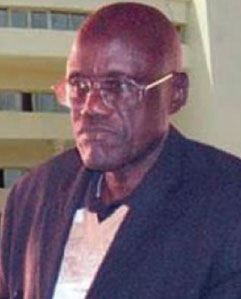 Former Director General of the Gambia Radio and Television Services (GRTS), Alhagie Momodou Sanyang, aged 64, passed away in the early hours of Saturday morning, after a long illness, and was in the evening laid to rest at the Bundung Cemetery.

Thousands of mourners including members of the Cabinet led by Vice President Isatou Njie-Saidy, acting Secretary General and Head of the Civil Service, Madi Jatta, Imam Ratib Alhagie Cherno Kah, members of the Supreme Islamic Council, among others, earlier gathered at the family compound at Bundung to pay their last respects.

Born on 25th December 1948 in Kombo Gunjur in the West Coast Region, the late Modou Sanyang joined the Gambia Information Department at Radio Gambia in 1970 as a messenger.

After two years at the Information Department, Sanyang was on 30th June 1972 promoted to work as a Jola announcer, and subsequently promoted to the post of assistant studio operator, on 1st July 1974.

On 1st July 1976, Sanyang became a studio operator, a post he held until 1st March 1982, when he became a sound recordist at the Film Production Unit.

On 1st May 1983, he became a film editor, and subsequently a senior tape editor, on 1st April 1996, when GRTS was under Gamtel.

Modou Sanyang retired at the age of 55, on 25th December 2003, and was on 1st February 2004 given a two-year contract as Manager TV Programmes.

After his contract expired in 2006, the late Modou Sanyang was again hired on 1st February 2006, and on 1st March 2006 appointed as Deputy Director General of GRTS.

After serving a few months as Deputy Director General, Modou Sanyang was on 13th June 2006 appointed as the Director General of GRTS, a post he held until 14th December 2012, when he retired on health grounds.

His former colleagues described him as a very hard working and caring boss.