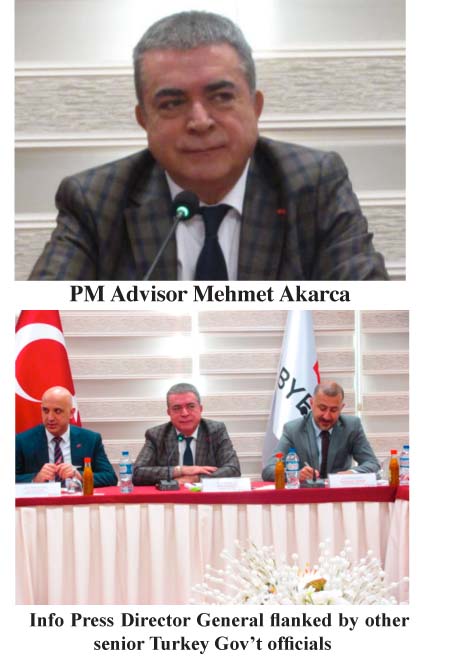 Senior Advisor to the Prime Minister of Turkey, Mehmet Akarca, has hailed The Gambia high among friends of Turkey, saying the land of peace in Africa has amazed the Turkish nation for its goodwill and solidarity with them, especially in the wake of the July 15, 2016 coup attempt on the Government of President Recep Tayyip Erdogan.

President Erdogan came to power in 2002 and over the years he has transformed the economy of Turkey, which was in bad shape when he assumed office.

However, on 15 July this year, some members of the Turkish military attempted to overthrow him, but failed when the people of Turkey took to the streets for days to denounce the coup attempt, and calling for democracy to prevail.

President Yahya Jammeh was among the first presidents to denounce the coup attempt, and to express solidarity with the Turkey people and government of President Erdogan.

This solidarity and courage by the Gambian leader touched the hearts and minds of the Turkish people, and further won the respect and brotherhood of President Erdogan and his government.

In his recent Independence Day speech in The Gambia, marking Turkey’s 93rd Indepedence Anniversary, Turkish Ambassador to The Gambia H.E. Ergin Soner recalled the solidarity stance of the Gambian leader.

He said: “On this challenging night [Friday 15 July 2016] for Turkey and her true friends, it was the Gambian leader, H.E. President Sheikh Prof Alhaji Yahya AJ.J. Jammeh Babili Mansa, who was among the first to demonstrate solidarity with Turkey, her elected President and Government, without even waiting to see or know how things would unfold.

“I am proud to share that The Gambia is a true friend for us in Africa and that the Gambian people are brothers and sisters of the Turkish nation.”

Indeed, this show of respect and admiration was also demonstrated in Turkey on Monday, at the opening event of the fact-finding mission of African media practitioners, including journalists from The Gambia – Baboucar Camara of Daily Observer, Talib Hydara of The Standard and Osman Kargbo of The Point newspapers.

“Ethiopia, Nigeria and Sierra Leone, for instance, are indeed our good friends in Africa, but our friend among friends is The Gambia, as their leader was the first to express solidarity with us in the coup attempt masterminded by the Feto Terrorist organisation,” said Mr Akarca, who is also Turkey’s director general of Press and Information.

Gülen is said to be presently residing in the US, while the Turkish government is seeking his extradition.

Born 27 April 1941 Muhammed Fethullah Gulen is a preacher and imam, as well as a writer, who founded the Gulen Movement. The movement successfully established schools and other learning institutions in Turkey and other parts of the world such as Africa.

According to Mr Akarca, Gulen used his movement for “something sinister” with the ultimate objective of dethroning President Erdogan, who was his close ally, and taking over power.

Turkey as a nation is, however, known for series of coups since 1950 (almost every 10 years until Erdogan’s regime) after the rule of the founder president of the Republic of Turkey, Mustapha Kemal Atatürk.