Mr. Malick Jones, ex-Principal Producer GRTS, is said to have been arrested again by the time of going to press, but this time for common assault, The Point can reveal.

Mr. Jones was reportedly picked up last Friday and has since been detained at Kairaba Police Station, on suspicion of having assaulted one Sainabou Cham, a lady he is said to have been living with in the same compound in Kanifing South.

It would be recalled that Mr. Jones was, in September last year, arrested together with Mam Sait Ceesay, former Press Officer at the Office of the President State House, and charged with giving false information to a foreign journalist. The state has since come up with two counts of publishing false publication against Mam Sait Ceeesay only.

Mr. Jones is expected to appear as a witness in the trial of Mam Sait Ceesay, whose case is expected to continue today at the Banjul Magistrates' Court. 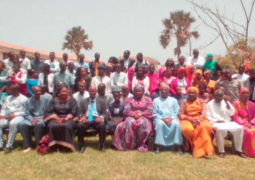