The second round of the national polio immunisation campaign is scheduled to kick-off tomorrow 24th April through Tuesday 27th April 2010.The campaign is a synchronised activity, spearheaded by the World Health Organisation, with support from UNICEF and other partners, to interrupt the transmission of the wild polio virus, with a view to eradicate polio from the African region. Vaccination efforts have significantly slowed the spread of this disease, but if contracted the effects of polio include paralysis, laboured-breathing and occasional deaths.

Once a person is exposed to polio, it usually takes about three to five days for the symptoms to appear. The polio virus enters the body through the mouth, usually from hands contaminated with the stool of an infected person. Of course, polio is preventable through immunisation. Therefore, collective efforts are required to get rid of the menace of polio in Africa. Back home in The Gambia a lot of efforts have been made in the global polio eradication initiative, thanks to the Ministry of Health, who conducted a series of national immunisation exercises. So far, there has been no importation of wild polio virus into the country, and the key surveillance and immunisation coverage indicator has been very good in the past years.

This is as a result of the high immunisation coverage the country has achieved over the years. Health experts say the routine OPV3 coverage for the past year has been above 90% for all the regions. As a result of this great effort, experts say, The Gambia was declared polio-free since 2004, which according to them, was made possible through the support of the country's development partners and the enthusiastic caring of parent/care-givers, who take their children for immunisation services. The campaign is said to include, among others, the administration of Vitamin A in the forthcoming polio NIDs, targeting children aged 6 to 59 months. This would, no doubt, go a long way towards reducing Vitamin A and health related problems.  We encourage the health Ministry to work very hard to ensure a hundred percent coverage on polio immunisation.

We also urge the communities to fully cooperate with the health officials to enable them carry out the imminisation successfully. In fact, this kind of campaign is better for the health and overall well-being of our children. Once more, let's join hands together and kick polio out of Africa. 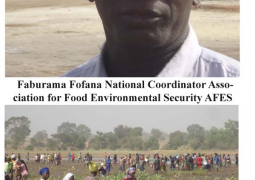