Night after night on our television screens we see those accused of various crimes paraded before the television cameras on GRTS.

These people are merely accused of having broken the law, and yet they are shown in handcuffs being led by police to the station or in the station itself.

It is the fundamental right of any person accused of a crime to be considered innocent until proven guilty!

These people should be allowed to cover their faces if they so wish, and be judged only by the courts of the land rather than by the television cameras.

Whether we like to say it or not, what is happening at the moment is trial by media. If these people are later found to be innocent their faces may still remain burned in the memories of some in relation to whatever crime they were accused of, and this is unfair.

It is a breach of their rights, and a threat to their good name. What is even more painful is the fact that while some suspects are quickly paraded before the cameras, others are never shown on the television, reasons for which we don’t know. This is real segregation.

In this country, we have a judiciary and a justice system, and we must allow these people and institutions to carry out their functions.

Indeed, every person is entitled to a fair trial and considered innocent until proven guilty!

It is this right which is jeopardised when people are paraded before the cameras before their trial is completed, and while they are still only suspects in a given case.

In other countries, it is even illegal for media outlets to show people in handcuffs before their trial is completed. If they are found guilty they can be shown in handcuffs, but not before.

We must do all we can to stop this practice. It essentially amounts to trial by media, and this is not one of the roles which the media should play in a society.

“Ill news hath wings, and with the wind doth go, Comforts a cripple and comes ever slow.”
Michael Drayton 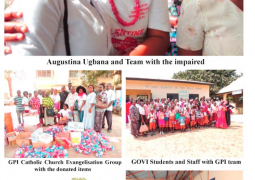 Giving the law a human face