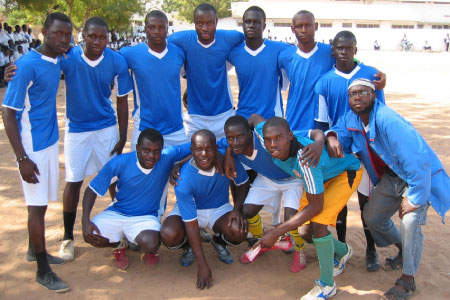 Lecturers yesterday beat Students Union by a goal to nil in the opening game of the Gambia Technical Training Institute (GTTI) Interdepartmental Football Tournament played at the institution’s playground.

Simon Sambou’s 25th minute strike was all but enough to earn the Lecturers team a hard fought 1-0 win over the Students Union.

Speaking to Pointsport shortly after the game, the president of the Students Union, Bunama Colley, said the tournament was part of their activities, adding that “all work no play makes Jack a dull boy”. “This is one of the reasons for organising the tournament,” he added.

Colley added that the tournament was also meant to bring the Lecturers and Students under one umbrella to interact and foster better understanding among them.

“This is one way of bringing the winner together to help them interact with one another in a bid to foster unity among them,” Colley said.

He said that each of the sixteen departments taking part in the competition paid D500 for participation.

Yankuba Nyassi, head coach of the Students Union, said the game was competitive adding that the Lecturers side proved a better team of the game.

Nyassi noted further that they would find time to train much better before their next game so they could be victorious.

Rehabilitation work gets underway at stadium