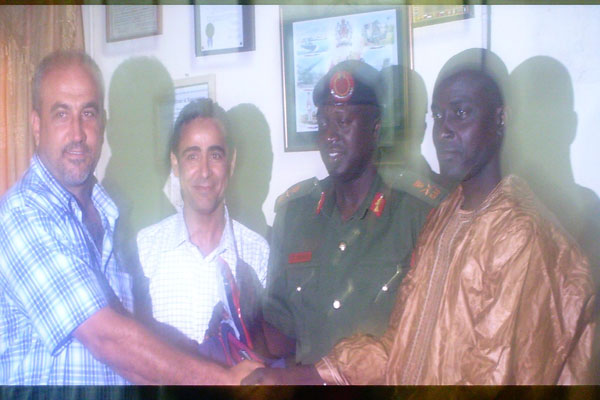 The Lebanese Community in The Gambia ( Lebcom) last Friday presented two sets of jerseys to the two NISA finalists, Immigration Department and National Drug Enforcement Agency, and also a trophy to the executiveof the National Inter Department Sports Association (NISA) at the office of the NISA President Major General Lang Tombong Tamba at the Army Headquarters in .

Speaking at the presentation ceremony on behalf the Lebanese community, Rambo, said they have appreciated NISA's efforts in organizing successful tournaments over the past seven years and commended its president Major General Lang Tombong for the good leadership role he is playing towards the development of the association.

For his part the president of NISA Major General Lang Tombong Tamba thanked the Lebanese community for the donation noting that they have been contributing their quota in the socio-economic development of the country.

He stated that Lebcom over the years have donated a lot to security and assured them that they are part and parcel of the development iniatives in the country.

He said the whole aim of establishing NISA is to bring together the security services and the civilian population together and also to foster mutual understanding among the workforce.

Major General Tamba also seized the opportunity to commend the NISA executive for their commitment towards the association.

Mr Bun Sanneh, chief executive officer National Drug enforcement Agency, described the donation as a historic moment adding that the health of any security outfit is sports noting that his agency will make the donated materials into good use and commended Lebcom for the good gesture.

Man dies after falling in a well