When the case was called, defence Counsel Combeh Gaye-Coker said there was a pending bail application before the court filed on 31 August 2015, asking for an order admitting the accused person to bail with such terms and conditions the court may deem fit.

She said the motion for bail is supported by an affidavit of 35 paragraphs sworn to by the applicant, adding that attached to the affidavit are exhibits AC1 to 4.

Counsel said the respondent is opposing the application, and filed an affidavit in opposition containing 4 paragraphs.

She said they had also filed an affidavit of reply sworn to by one Omar Joof containing 18 paragraphs, and they are relying on all the paragraphs.

She adduced that the application was brought under section 19 of the constitution which supports the presumption of right to liberty of all persons, and section 99 of the Criminal Procedure Code which supports applicant’s right to bail.

“It is obvious and not in denial that the charges pending before the court are all bailable offences,” counsel said, adding that a previous bail application was made at the high court and same was refused by Justice Abi.

“My submission is that the accused is not charged with any offence that relates to broadcasting of any information over any medium such as radio or television, and I urge the court to check the word broadcaster,” she submitted.

The accused had not broadcast any information over any medium and that is not the charge before the court, she said, adding that all of this is a mere allegation at this stage, and that the alleged offending pictures and materials were sent via telephone.

“It is not indicated that the information was broadcast,” submitted counsel.

“The respondent did not deny the fact that the alleged seditious information was not broadcast in any medium; what we were concern here is publication and distribution, which all has its meanings in law,” she said.

On the reasons of refusing bail to the applicant by the learned judge, Justice Abi, the applicant in the affidavit of support said the “judge is concern that if such a repetition is allowed to occur, it cannot be speculated what manner of effect it will have on the security of the nation.”

She said the judge stated that the charges touch on national security.

“It is our submission that the reasons stated by Justice Abi for refusing bail to the applicant are not supported by the facts of the case, and also contradicts the applicant’s right to be presumed innocent until proven guilty,” counsel continued.

She said there was no link between the offence the accused is charged with and his work as a manager of a radio station.

“It is my submission that from the ruling of Justice Abi, the judge appeared to have “confused” the issue of broadcasting of information and the issue of publication and distribution of the alleged seditious materials,” she said.

The alleged seditious material from the information filed before the court was alleged to have been sent via SMS over a telephone, she said.

“There is absolutely nowhere in the information, where it is alleged that the accused broadcast the allege seditious information over his radio station or TV which, therefore, supports my argument that his work as MD has nothing to do with the charges before the court as stated in paragraph 17 of the affidavit in support,” counsel further submitted.

“It is clear that the allege fear by the judge that if granted bail to the accused there is a possibility of repetition, we submit that the said fear was speculative and unsupported.”

The law is in favour of granting bail to the accused person at this stage, because it is the duty of the state that is opposed to the bail application to bring forward enough facts before the court as to why the applicant should not be granted bail.

The seriousness of the charge on its own should not be a reason for refusal of bail without other compelling factors, adding that that there was no evidence that the threats in the seditious information are active threats.

The applicant had stated that in his knowledge nothing happened on 22nd July 2015 and there are no active threats to the nation’s security, counsel went on.

The respondent in their affidavit in opposition stated that they would prosecute the applicant expeditiously, which is of no significance because the applicant has a right to liberty.

“I urged the court to grant bail to the accused on such terms and conditions that the court deems fit,” she further submitted.

In response, DPP Barkun said that they are again opposing the bail application, adding that they had filed an affidavit of 4 paragraphs.

In applying for bail during subsequent proceedings, what is intended was that there has to be a new development in the course of the hearing of the matter or that there is a condition which has not been fulfill by the respondent.

Paragraphs 12 to 17 of the affidavit in support are not factual, and are more of grounds of appeal of the court and argumentative, the DPP told the court.

He said the court could not sit as an appellant court over its own decision.

He said the high court is not competent to hear the issue that its learned brother is said to “confuse”.

He said the ruling on bail application by justice Abi is foreclosed, and counsel has no right to bring it up again.

He said the only condition under which the application should be brought before the court is when the state failed to arraign the applicant within seven days, as ordered by the judge.

DPP said the application is more of an academic exercise, and counsel should not have brought it in the first place.

He said the fact that an applicant is presumed to be innocent until proven guilty does not mean that he should be granted bail automatically.

“I believe that the application is misconception of the order of the court, and I urge the court to dismiss it and allow the prosecution to proceed with the case.” 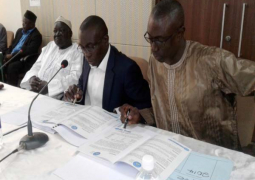 Tolerance in the teaching of the Great Prophet(s) and in Liberalism: A Contrastive Analysis (Part 2)