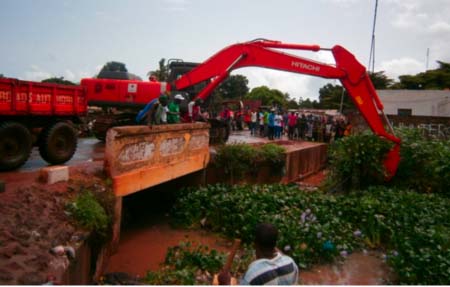 The Latrikunda German Ward Development Committee, in collaboration with the community of Latrikunda Medina, commonly known as “Half Die”, recently embarked on a cleansing exercise along the stream of Kotu Bridge.

The cleansing exercise, a community-based initiative, attracted a large turnout of volunteers who participated in the exercise.

Speaking on the occasion, the Alkalo of Latrikunda German, Alhagie M.O. Faal, commended the volunteers for the good initiative.

He also hailed the newly elected Latrikunda German Ward Councillor for actively participating in the exercise.

He as well urged them to make a stop to dumping along the streams as it causes water blockage and creates breeding ground for mosquitoes.

The Alkalo said further that people should be their own watchdogs and calls for a stop to indiscriminate disposal of wastes to the stream, while revealing that stern actions would be taken against anyone found littering indiscriminately.

He urged the neighborhood to cooperate with the government and supporting institutions to ensure a clean environment, for their own hygiene, safety and protection.

The Ward Councillor of Latrikunda German, Jerre Sanneh, said the initiative is set to lessen the suffering of people of the neighborhood, saying Kotu Silo bridge has been having long distance water flow, which causes residents to suffer from flooding during the raining season.

“We came up with the idea of ensuring a free flow of water by cleaning the stream,” he said. “People should stop dumping wastes when they are off-sight and should learn to be their own watchdogs to their own communities.”

Anti-littering is a crime, he added, saying anyone apprehended would be dealt with by law.

He thanked President Yahya Jammeh for providing the equipment as well as the Alkalo of Latrikunda German, the KMC and the neighborhood for their participation.

She urged community members to work towards ensuring a clean environment by discouraging waste dumping in streams, saying: “Waste management is a major challenge within the municipality.”

BIBLICAL REFLECTIONS: AND HE HEALED THEM ALL