The evidence adduced before the court left the trial judge with no option but to convict the culprit for manslaughter, instead of murder as previously charged.

Kadijatou Jallow, who was imprisoned for twelve-years, was charged for unlawfully causing the death of one Ramatoulie Jallow by stabbing her with a metal object on her stomach in Serrekunda London Corner on 3rd February 2009, knowing that death was the probable consequence of such act.

Delivering his judgment, Justice Moses Richards issued a stern admonition that "our society will not condone any longer the rampant taking of life currently experienced in the last few years."

According to Justice Richards, this sadistic situation in our society is really frightening. The judge, in his judgment, therefore, declared a crusade against murderers in order to put an end to this menace.

"No murderer will go scot-free without being severely punished at the Special Criminal Court if found guilty," he declared. 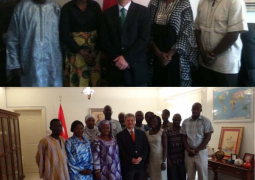