The wood re-exporters in the country must be commended for their efforts in restoring the country’s lost forest cover.

Other than the recent donation of one thousand seedlings of mango, cashew and oranges, the Association of Wood Re-exporters and Forest Users in The Gambia, last month also in Kanilai village in Foni planted eight hundred mahogany trees.

The wood re-exporters through their association are also supporting the 2012 nationwide tree planting exercise.

We also envy the collaboration between the wood re-exporters and forest users in The Gambia and their partners such as the Ministry of Forestry and the Environment, Department of Forestry and local authorities in protecting the environment.

Having said that, the wood re-exporters are contributing immensely to the development of the Gambian economy.

They are also creating employment opportunities for many young people, most of whom without the business would be jobless and frustrated.

We, therefore, salute the wood re-exporters for their foresight and contribution to the socio-economic development of the country through their various interventions.

We urge all relevant stakeholders, particularly the Ministry of Forestry and the Environment, to give them all the necessarily support, and not to allow any group to discourage their efforts. 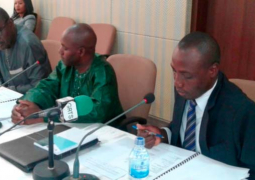