The prosecution has continued to tender more statements in the treason and sedition trial involving Dr Amadou Scattred Janneh and others at the Special Criminal Court in .

Yesterday’s proceedings saw the prosecution tendering both the cautionary and voluntary statements obtained from the third accused person.

Testifying, Dawda Touray, a CID police officer and the ninth prosecution witness (PW9), told the court that, on 21June 2011, he was on duty at the Police Intervention Unit, when he was assigned to record the cautionary and voluntary statements from Ebrima Jallow, the 3rd accused person.

He added that he obtained one cautionary statement and two voluntary statements, adding that it was later translated in the local language, which he (Jallow) accepted and signed and an independent witness also signed the statements.

The witness identified the statements as the ones he obtained from the third accused, and they were tendered and marked as exhibits.

Under cross-examination, the defence counsel asked the witness whether he endorsed at the back of exhibit G1 that he spoke to him in Wollof when the accused person is a Fula.

The witness responded that he did not endorse anything like that at the back of exhibit G1.

Meanwhile, defence counsel L.S Camara had told the court that there was a pending bail application for the three accused persons charged with sedition.

Counsel told the court that the motion was dated 1 November 2011 and filed on the same day, and was seeking bail for the three accused persons, going by the laws of The Gambia.

He pointed out that the motion was supported by a 20-paragraph affidavit and they are relying on all the paragraphs, particularly paragraph 4 to 20.

Counsel added that it was clear that the accused were charged with sedition, adding that the charges before the court are bailable offences.

He said investigation into the case of the accused persons was completed and substantial charges have been preferred, citing cases where the accused were charged with sedition and were granted bail.

He pointed out that the state has filed a 5-paragraph affidavit in opposition, of which the only paragraph worthy of mention was paragraph 5E.

The case was adjourned till today for ruling, and continuation of hearing. 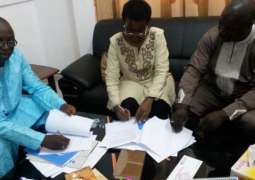