Kombo South district football tournament is set for Ramadan break with one more match to go in the first round.

Mamuda are topping group A and are also unbeaten in five matches after snatching victories and two draws in their previous outings.

Tanji and Nyofelleh are second and third place in group A with one victory and three draws in their last outings, while Batokunku are rooted at the bottom in group A after securing three drawsand two defeats in their previous outings.

Kartong and Berending are leading in group B after winning most of their games and having few draws.

Whilst Berending are unbeaten, Kartong have lost one game in the group B in the hands of Berending in an encounter played at the Kartong football field at the weekend.

Debutants Pacholing are third-placein group B after snatching one victory and one draw in their previous matches and lost to Kartong both home and away 4-0 and 2-1 respectively.

Sifoe are currently languishing at bottom-place in group B after losing most of their games.

They are however hoping to win their remaining group tie against Kartong after the Ramadan to fancy their chances of qualifying for the quarterfinals as well as keeping their hopes of retaining Kombo South district football tournament title four times consecutively.

Jambanjelly and Tujereng are first and second spots in group C respectively after snatching victories and three draws in their previous outings.

Banyaka are third-place in group C after securing one victory, two draws and two defeats in their last outings.

They are hoping to win their remaining game against Tujereng to improve their hopes of qualifying for the quarterfinals.

Gunjur Kunkujang are languishing at the bottom in group C after losing three games and drawing one in their previous games.

They need to produce a miracle to increase their chances of reaching the quarterfinals. 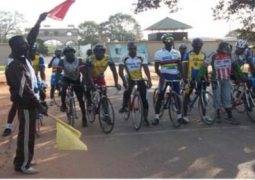