The former principal lands and Valuation officer at the Ministry of Local Government and Lands, Hamidou Jallow, yesterday commenced his defence testimony in the trial involving him and others before Principal Magistrate Modou MS Jallow of the Banjul Magistrates’ Court.

Designated as defence witness two (DW2), Jallow told the court he is not working, but previously worked at the Ministry of Local Government and Lands for almost 20 years.

He rose through the ranks to become the principal lands and valuation officer.

As principal lands and valuation officer, his work included assignments and all other official work given to him by the director, he said.

He said as principal lands and valuation officer, he also acted as permanent secretary technical at the Ministry of Lands and Local Government in 2011 when the PS was on holiday.

He said the role of the alkalolu was very crucial in land issues, because the alkalolu are the ones who are able to help or decide who own lands and all other agencies rely on the alkalolu for the title deeds and customary lands matters.

According to him, if the alkalo signed any document, the local government authority used to endorse the document based on the endorsement made by the alkalo.

These two line departments served as input and technical advisory bodies to the Ministry of Local Governments and lands, he told the court. 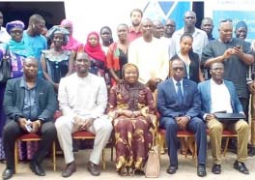